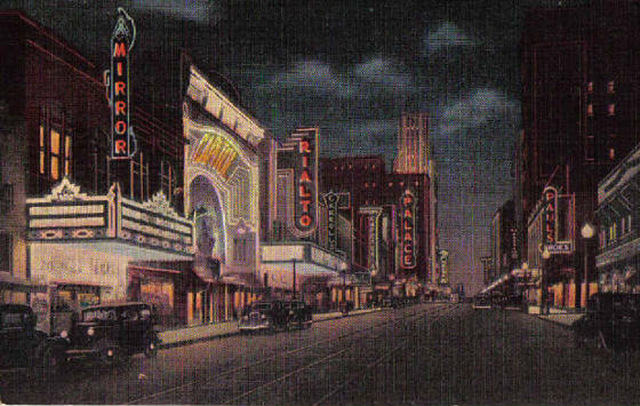 This theater stood on Elm Street near Akard Street. It opened as the Garden Theatre in 1912. It became the Jefferson Theatre in 1915. In 1922 it was remodelled and became Pantages Theatre, and in 1928 it was renamed Ritz Theatre.

It was remodelled again in 1931, to the plans of architect W. Scott Dunne and it was renamed Mirror Theatre. It was destroyed by fire on August 2, 1941. Two retail units were built on the site. An office building is on the site today.

The postcard view Lost Memory linked to on Feb 14, 2008, is no longer at the same location, and the link now fetches another version of the same postcard ken mc linked to in the subsequent comment. The card showing the Mirror Theatre next door to the Capitol is now here.

The Mirror could not have been the Telenews unless the same auditorium was reached through two different street-front buildings at different times. If it wasn’t the same auditorium, with the entrance shifted to the adjacent building when the Telenews was opened, then the Mirror had to have been an entirely different theater. It must have had a different address, too. Also, if the date Moody’s Collectibles gives for the postcard I just linked to is correct (1931) then the name Mirror was given to the house before 1933.

As for the Pantages time-line currently given in the intro, Motion Picture Times of October 6, 1928, said that the Pantages Theatre in Dallas was being remodeled and was slated to reopen as the Ritz on October 16. Unless the new operators, Robb and Rowley, changed their minds about renaming the theatre at that time, the city directory cited by Jack Coursey in the first comment above kept the name Pantages way too long.

From 1933, a postcard view of the Mirror Theater in Dallas along with the Capitol, Old Mill and Palace.

As the opening ad for the Telenews posted above by Mike Rivest gives an address of 1515 Elm for that theater, and the Capitol has an address of 1521, and given that the Mirror’s entrance was between these two theaters, its correct address must have been either 1517 or 1519 Elm.

The last mention of the Mirror I’ve been able to find in Boxoffice is from the issue of August 26, 1939. At that time it was being operated by Robb & Rowley.

The July 18, 1942, Boxoffice article about the Telenews that I mentioned in an earlier comment is right here. It has several photos, a small floor plan and cross section scheme of the building, plus a bonus picture of architect Jack Corgan. The floor plan shows that the Telenews was on one lot.

The only way I can think of that the Mirror and the Telenews could have occupied even part of the same footprint is if the Mirror was an L-shaped theater, or if its auditorium was behind the building next door to its entrance, and the lobby made an odd jog to reach it. I can’t think of any reason why the latter would be the case, unless the Capitol Theatre’s auditorium occupied part of the lot behind the Mirror’s entrance. Unfortunately Historic Aerials has no views of this location earlier than 1958, long after the Mirror was gone, so I can’t check to see if the Mirror was L-shaped. The Capitol doesn’t look like it spreads onto the back of the Mirror’s lot, though, but then its auditorium might have already been demolished by 1958.

The name of the Telenews was changed to Dallas Theatre in 1950, by the way, so if I’m right neither of those aka’s listed above belonged to the Mirror.

From the late 1930s a postcard view of the Mirror Theater on Theater row in Dallas.

Joe – you are right in saying the Mirror (Ritz/Jefferson/Pantages/Mirror – NOT Garden, that was demolished back in the teens or twenties) and Telenews were different construction. Mirror burned, was demolished, Telenews arose (partly) from those ashes, along with another business on the old Mirror footprint.

The Mirror and its four antecedents only existed at one address: 1517 Elm. Doing business first as the Garden Theater (1912), then the Jefferson Theater (1915), then then Pantages, then the Ritz (1928), and finally the Mirror (1931) which burned down in 1941 after ten years in operation. The nearby Capitol operated at 1521 Elm while the unrelated Telenews/Dallas operated only at 1515 Elm.

1515 Elm was initially a paint store when the theater at 1517 Elm opened as the Garden Theater in 1912 as well as its change to the Jefferson Theater in 1915. 1515 Elm would became three grocery stores (Piggly Wiggly, briefly Lotus Foods, and Helpy-Selfy) during which time the theater was the Pantages and Ritz. 1515 Elm was home to several businesses including Van Winkle’s Book Store and a tavern at the end of the theater’s life which would then be known as the Mirror Theater before the theater burned down in 1941. 1517 Elm would become a retail space adjoining the Telenews in 1941/2.

The Mirror’s neighboring store at 1519 Elm was a well-placed candy store considering that at 1521 Elm was home to the “new” Capitol Theater in its second home at 1521 Elm. But that became a mixed blessing on August 3, 1941 when the Mirror burned badly ending its run as a showplace and took the candy store — though not the Capitol Theater — with it.

The Garden Theater was opened in 1912 playing motion pictures and some live performances. On March 8, 1915, the theater under new ownership of C.H. Verzchoyle and William E. Wetherford decided to stress live theater and renamed it the Jefferson Theater. They stressed and advertised that the location would be home to repertory presentations and “not moving pictures."

While reports said the project was profitable, the theater quickly was under the direction of Ray Stinnett who also owned the Cycle Park locally. Stinnett reconsidered the programming and returned the theater to its moving picture roots. He then sold the Jefferson to the Southern Enterprises circuit in 1920 which continued motion pictures but closed the theater early in 1922.

Stinnett resurrected the theater re-opening it in November of 1922 initially as the Jefferson and trying to position it as first-run house and musical comedy showplace. Obviously liking the live musical comedy aspects’ prospects, Stinnett changed the name of the theater to the Pantages in 1926 after remodeling it and trying to do move into live vaudeville. The vaudeville concept was said to be a very expensive failure for Stinnett who transferred the theater to a new operator.

On October 15, 1928, the Pantages was renamed the Ritz and billed itself as the first second-run Vitaphone movie theater in the United States. For a discount price, you could see second-run talkies. Now run by Robb and Rowley Theater Circuit and managed by W.B. Underwood, R&R invested $40,000 to remodel, redecorate, and bring sound film to the location. W.B. King was instrumental in the redesign with drapes, canopies, new front lobby and a kiosk at the theater’s entrance. They opened appropriately enough with “Lights of New York,” the first all-talking feature.

On February 7, 1931, R&R sold the Ritz along with the Rosewin and Midway as well as other locations in a $2.5 million deal by infamous millionaire Howard Hughes and partner Harold B. Franklin’s Hughes-Franklin Theater Company. The move was part of a larger $15 million transaction to strengthen the circuit.

Robb and Rowley were still managing the property and had the influx of money to remodel and refurnish the Ritz after the Hughes' transaction. In one of his last decisions for Hughes-Franklin, Franklin visited the Ritz and determined that Dallas was one of the bright spots in the country and that the theater location should reflect that. W. Scott Dunne was the architect of the redesign and the theater only shut down three weeks to become a “house of mirrors” renamed the Mirror Theater. Two shifts of workers worked full 24-hour schedules to make the redesign a reality. A perforated screen allowed for sound speakers behind the screen instead of the two horns used in the Vitaphone presentations. And the mirrored marquee and mirrored interior panels along with the flashing neon lights delivered Franklin’s vision and Dunne’s designs.

Before the theater was reopened, Franklin left Hughes to operated Paramount and United Artists theaters. The Mirror Theater opened Christmas Day 1931 with “Five Star Final” as its first screen attraction. While known primarily as a second run house, the Mirror capitalized on westerns from the minor film companies to stage live appearances. Under new operator, Interstate Theater Circuit, Gene Autry, Buck Jones, Tex Ritter, Monogram’s John King were among the stars to appear on the Mirror’s stage.

On August 2, 1941, a four-alarm fire decimated the Mirror during closing hours with the balcony crashing to the main floor. It was fortunate the theater was empty because the fire officials said the non-fireproof insulation engulfed the theater quickly and sparking electrical cables were visible. Just three weeks later, plans to build a new and unrelated newsreel theater were finalized at 1515 Elm to replace the former retail space and would be known first as the Telenews and then the Dallas Theater.

On September of 1941, Rear Admiral Adolphus Andrews of the U.S. Navy who owned the 1517 Elm property housing the still standing but charred Mirror was able to make a business trip to inspect the wreckage of the Mirror Theater. He ultimately determined that the building should be razed. 1517 was rebuilt as a retail space and housed a gift store and a game company above. Thus, the Garden/Jefferson/Pantages/Ritz/Mirror theatrical era ended after 29 years.

Thanks, dallasmovietheaters. I’m glad we’ve finally gotten that confusion cleared up. Now we need a page for the Telenews/Dallas Theatre.

1929 photo courtesy of the Traces Of Texas Facebook page.

My grandparents operated two businesses once located at 1519 Elm St. (formerly The Mirror) during the 1940s-1950s. The Juice Bar / bar and arcade and The Tobacco Mart / tobacco products, news stand, shine parlor, and photo services. Their only son, my father b.1933, literally grew up inside all the movie houses that once lined Elm St.. I have several interesting family pics. taken on the street at this location including one taken in 1953 (dated to the movie marquee) of my GM standing in Elm St. in front of The Rialto along side The Budweiser Clydesdales. My father can most likely fill in some details from this time period.