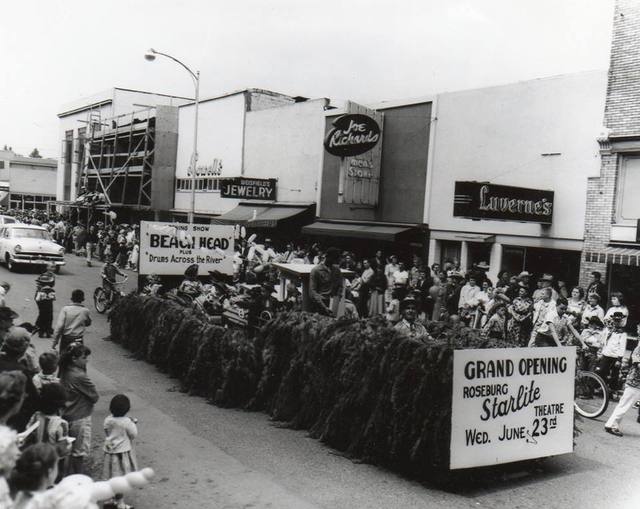 The single-screen Starlite Drive-In in the Green District of Roseburg, OR. opened June 23, 1954 with “Beachhead”. On December 25, 1971 a 300-seat walk-in cinema was added onto the snack bar. When it was sold to a Native American tribe around 1995, a clause required it to not show movies for 20 years.

A veterans group then rented and refurbished the walk-in, into their meeting hall. I don’t know if the seats are intact or not. The drive-in screen stood until 2007, the marquee and ticket booth remain. I the later years, the theater had radio broadcasts, rather than pole speakers.

The theater is in a somewhat new industrial area and will most likely end up being demolished for new construction.

The Cow Creek Indian Tribe bought it in 1999 with the 20 year deed restriction. Sometime in 2007, the screen tower was deemed ‘structurally unsafe’ and was to be torn down. To their credit, the Tribe put on a Grand Closing on Sept. 26th. with one last showing of Grease. The screen was torn down 3 weeks later on October 17th. The Tribe has leased the buildings & property to UCC for their Construction Technology classes. The snack bar and indoor theater have been converted to classroom & workshop space. The box office still stands and a speaker graveyard by the back fence.

A blog entry with a few photos of what was left of the drive-in, and one shot of the demolished screen tower. Courtesy Steve Swanson: http://www.freewebs.com/travelswithsteve/apps/blog/show/prev?from_id=717563

Would anyone go in with me to discuss lease/option on the theatre from the tribe? From what I read (I’ve owned a theatre in 2007), drive-ins are making a comeback as a historic tourist attraction; and making good profits. Don