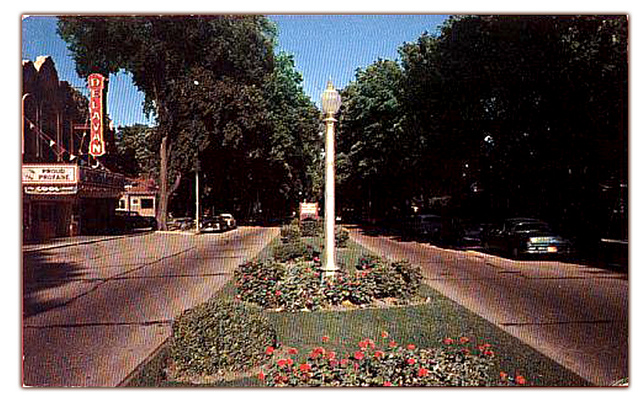 This was a charming Atmospheric style small-town theatre, at the east edge of the downtown business district on busy Wisconsin State Highway 11. The Delavan Theatre was opened in spring of 1929. Through the 1960’s it retained its original appearance, with its rectangular marquee and classic chaser-lighted vertical sign. It was twinned in 1968 and the stage house was demolished at that time. But by the 1970’s much of the lower façade was redone in the current simplistic style of that age, exterior ornament was removed, and its 1929 exterior charm was largely gone.

In 1999, newspapers reported that theatre operator Carmike Cinemas was sued by Standard Theatres of Brookfield, Wisconsin (which no longer operated theatres) for leaving the Delavan Theatre in unsatisfactory condition after vacating its tenancy.

After being listed on the real-estate market for some time, the Delavan Theatre was sold in about 2006 to the River Of Life Christian Church of Williams Bay, Wisconsin. They assembled some historic photos of the Delavan Theatre on its website, including construction photos and interior scenes. By early-2020, the church had vacated the building and moved on to 1220 S. Shore Drive.

Here is a view of the church from Google maps:
http://tinyurl.com/6s3u2e

Irwin Stephan, 36, was killed Thursday afternoon when his car collided with a freight train at a crossing in Delavan. Stephan, married and the father of four, came here six weeks ago from Palmyra (Jefferson County) to manage the Delavan movie theatre.

[For the record, Bitter Rice is now considered a major Italian film classic and even appeared on an Italian postage stamp commemorating the films of the Italian neo-realist period after World War II.]

The “New Theaters” column in The Film Daily of March 12, 1929, said: “Delavan, Wis. — Construction of the new
Delavan is nearing completion.”

There is surprisingly little about this theater in the trade journals. In the 1940s it was a Warner Bros. house, and in 1949 the manager was named Bud Campbell, and that’s all I’ve found.

The NRHP nomination form for the Delavan Downtown Commercial Historic District says that the Delavan Theatre was designed by Milwaukee architect John Wolf. The twinning took place in 1978, and the stage house the theater originally sported was demolished at that time.