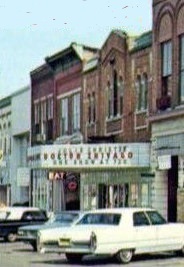 A compact little theatre sitting on the town square. It opened in May 1928 with 1,300-seats, first as a silent film house, then movie theatre through the 1970’s. The theatre no longer shows movies, as the screen and projection equipment have been removed for over 20 years. It always had a stage for community events, and now is home to a local community theatre group.

The theatre has been privately owned by Lakeland Players Ltd. Community Theatre, and has been used as their home and stage for live productions since 1990.

(Racine Journal Times)
Woman and 2 Men Held for Burglary
ELKHORN, Wis., July 11, 1934 â€" Eugene Hansen, 3S, Otto West, 34, and his wife, Lottie, 32, Janesville were arraigned here yesterday, charged with breaking and entering. Justice Harry Ellis bound them over to county court under $5,000 bail. They are suspected with carrying away the safe of the Sprague theater here the night of May 20, obtaining $600.

Elkhorn today dismissed with a yawn the news that Germany claimed the near-defeat of the Russian armies.

Headlines announcing the death of the son of Benito Mussolini received only a passing glance.

Elkhorn had a movie star.

The event lacked the bombast of some of Hollywood’s supercolossal premieres, but it was Elkhorn’s first and the town made the most of it.

Nearly all of Elkhorn’s 2,500 inhabitants were either inside the theater or jammed along the sidewalks outside, and everybody executed his own idea of how to behave at a premiere â€" except pretty red-headed Kay. When she stepped onto the stage to receive a bouquet from Mayor Thyson, she confessed she was unschooled in behavior at premieres, this being her first.

It was a triumphant return for the 22-year-old girl who left not long ago for a radio job at Cincinnati, Ohio. A producer spotted her at the radio station and offered her a screen test. There followed a six-year contract with Columbia studios and the lead in “Tillie the Toiler.”

Kay’s triumph lacked only the presence of her brother, John, who was attending Harvard university, and her hometown sweetheart, Charles Peters, who sat disconsolately in an army camp at Cheyenne, Wyo.

Kay rested today preparatory to a return to Hollywood to begin another picture.

MILWAUKEE – Alexander H. Bauer, Milwaukee architect, died in a Milwaukee hospital Wednesday from a cerebral hemorrhage suffered while attending a business meeting here. Bauer, a past president of the Wisconsin Institute of Architects and a 32nd degree Mason, is survived by his wife, Etta.

Dan Kelliher built and opened the Sprague Theatre in May of 1928 with 1300 opening-night patrons in attendance. Public-school superintendent Charles Jahr Sr. was the master of ceremonies and Yonk’s Burlington Orchestra in the pit, and the Princess Quartet vocal group (Kelliher, Ken Goodrich, Victor Johnson and Paul Hughes) offered selections.

Elkhorn Mayor E. T. Ridgway and Attorney E. H. Sprague – for whom the theatre was named – addressed the audience. (Sprague had built his opera house just to the west on the footprint where the Municipal Building now stands, but a fire destroyed it in 1925.)

The opening feature was Mack Sennett’s “Good-Bye Kiss” in its premier screening, and the Sprague’s first Vitaphone feature was “Broadway Melody” in May 1929, with sound provided by a phonograph turntable in the projection booth.

It’s said that Dan and Luella Kelliher ran a quality operation at the Sprague for 46 years under their 1928 pledge: “We will never permit anything shoddy or cheap within these walls.”

Arlene Wilkinson was the longtime cashier. The usual program began with a few advertising slides followed by Movietone News, a cartoon and/or a short subject, and then the feature. There were also several free-admission events each year, including a Christmas-holiday program with a bag of candy and another on Halloween plus a program after the parade of high-school students downtown after a bonfire the night before the homecoming football game.

At some time after the Kellihers retired the Sprague Theatre began to show signs of neglect, until the local Lakeland Players theatre group purchased it in 1990.

Architect Alexander Bauer was a partner in the Milwaukee firm Dick & Bauer. The Sprague Theatre was listed as one of their works in an ad the firm published in 1929.