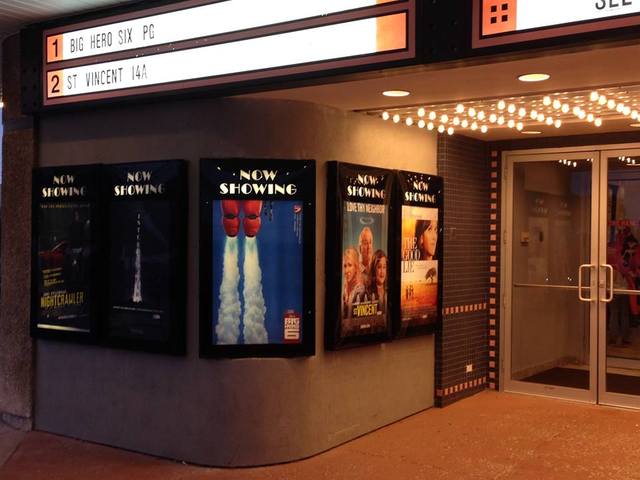 One of the grand “Garth Drabinsky”-era Cineplexes. The Mews' huge lobby takes you back to the heyday of Cineplex in Canada.

Now run by Encore Cinemas, it is being returned to it’s original look after five years of serving as a church.

Some pictures I took on Thursday October 7th 2010

I uploaded the grand opening ad that was shared by the Sherway Cinemas.

Closed in 1999 it’s short existence being at least in part due to the fact that a “Famous Players” multi screen cinema opened in 1989 less than a 10 minute drive away.

This building then became a church “The Meeting House”

Reborn in 2007 as an “Encore Cinema” a small Canadian chain based in Burlington Ontario.

I don’t think it was the FP Oakville Town Centre cinemas that prompted the closing, rather the AMC Winston Churchill 24. Both the FP and the Cineplex seemed to do quite well until that put them both out of business.

I actualy blame myself …

I bought one of them new fangled VCR player things and a whole bunch of cinemas went out of business.

Does anyone have any pictures from back in the Cineplex days? I’ve tried to contact Encore, Cineplex and even archives in Oakville, but so far I’ve come up short!

Currently operated as an independent cinema by Film.ca. Many upgrades have been done, the theater is all digital now. New, larger plusher seats have been added, affording better leg room.

^ Film.Ca is the same company as Encore. Same management. The name was changed to reflect that it is no longer a second run theatre.

Not wanting to get married in a traditional church, my wife and I reached out to several movie theatres. Film.ca was the only one that would forego a matinee and rent us a theatre. (Cineplex wanted a ridiculous amount of money, and wanted us out of the room before noon) I’ll upload some photos to the photo section.