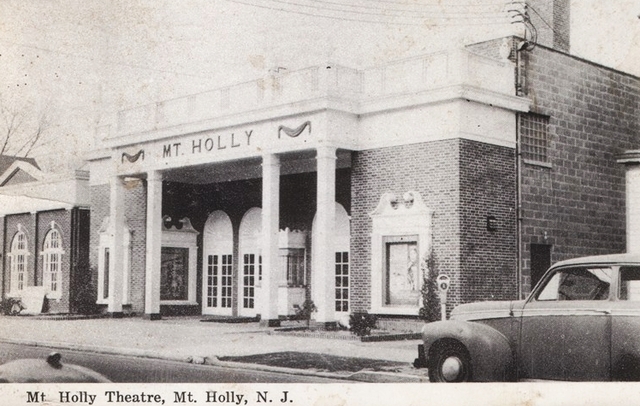 I guess that this theatre didn’t have air conditioning:

Note the proprietor’s name is different from Mr. Fox. Probably a subsequent owner.

Seeing this photo of Mt. Holly Theatre was great. What wonderful memories I have of going to this theater in the late 1950’s to late 1960’s. I’ve been searching for years for a photo. The theater did have air conditioning which worked extremely well. Many cold times watching films. I wasn’t aware that it had 935 seats. Didn’t seem that big. This place was really classic. It was a real thrill and a neat presentation to watch movies in the theater. It had curtains which had red, blue, and green lights shining on them from the stage floor. All trailers were rolled over the closed curtains with lights on and then the lights would dim to off while the curtains opened to reveal the screen. Toward the end of the last trailer, the curtains would close fully, then the feature film would be rolled right behind the last trailer and the curtains would re-open to reveal the screen. It was really classy and show biz like. All in the presentation. The theater was always well kept. I was sad to learn years ago that the theatre had been demolished and is now a parking lot I believe. The theater was not located on Main Street. It was on Washington Street across the street from the post office.

This is the Mt. Holly after it stopped showing movies, as the Center Stage live theater venue.