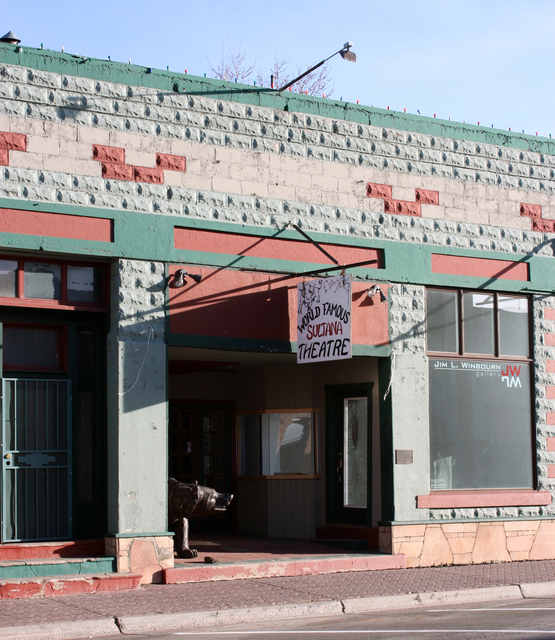 The Sultana Theater opened in 1912, showing silent films. Talking films were shown starting in 1930. On July 1, 1938 it was raken over by Harry L. Nace Theatres chain and was still open in 1957. The space is currently occupied by a steakhouse, but the screen and curtain remain.

The Sultana may have used a Reproduco automatic piano/organ unit to accompany the silent films. These had three ranks of pipes in addition to the piano.

The Sultana Theatre is at 305 W. Route 66 (aka Grand Canyon Avenue.) A sign reading “Sultana Theater” is above the entrance, but there is no signage indicating that there is still a steak house in the building. It must have either gone under or moved to another location.

Next door to the east, at 301 Route 66, on the corner of 3rd Street, is the “World Famous Sultana Bar,” and next door to the west, at 309, is a tobacconist’s shop called “Oh Sweetie.” The three occupy a single-story edifice with a unified facade, but satellite view shows that the part with the tobacconist was probably a later addition to the L-shaped corner structure. The theater’s auditorium, which has a gabled roof, looks like it might have also been a later addition.

A TripAdvisor review of the bar dated March 25, 2016, has this somewhat puzzling bit about the theater:

“The Sultana theater is a private type of setting, and does have various activities going on: Sometimes, shopping sprees, memorials, and the like. Sometimes, maybe a wedding or some other activity.”