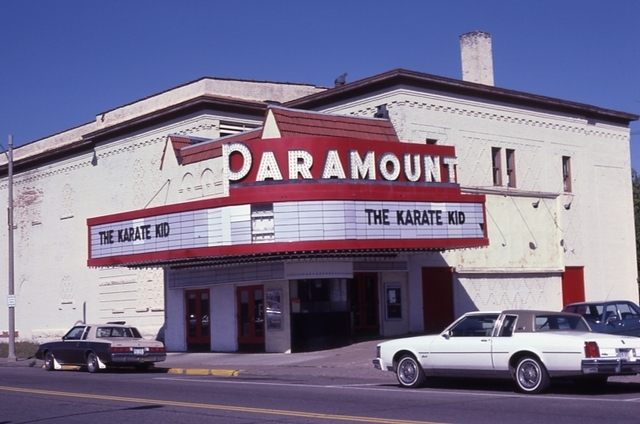 It was remodeled in 1929 in an Atmospheric style to the plans of architectural firm Liebenberg & Kaplan and was reopened as the Paramount Theatre on December 31, 1929. This theatre was one of the bigger theatres in Brainerd. According to the Brainerd Dispatch, it offered movies for 25 cents in 1943 and was closed in September 1985, and demolished in April 1994.

The Paramount Theatre and Brainerd Theatre were the only two theatres in Brainerd from the classic era that survived into the 1960’s, 1970’s and 1980’s.

Here is a June 1954 ad from the Brainerd Daily Dispatch:
http://tinyurl.com/yqkazj

According to Movie Age of November 30, 1929, the new Publix house at Brainard was scheduled to open on December 15. It was, the magazine said, “…an atmospheric theatre with open sky and twinkling star effects.”

Did they mean the style was atmospheric or something else?

According to local sources, the Paramount Theatre was built in 1890 as the Park Opera House. A 1987 item in the local newspaper said that the last movie at the Paramount was shown on September 5, 1985. Another item noted that the style of the 1929 remodeling was “Spanish Mediterranean.”

There are exterior photos of this theatre in the Liebenberg and Kaplan papers at the University of Minnesota library which would indicate they were the architects in 1929.

A more reliable source than the one I cited earlier indicates that the Park Opera House actually opened on December 2, 1901. It was designed by Duluth architect John J. Wangenstein. The house was remodeled in 1914, reopening as the Park Theatre on May 18.

A more extensive remodeling, including a new, larger entrance, was carried out in 1919, with an October 19 reopening. A severe windstorm on June 8, 1920, caused significant damage to the building, and the Park Theatre remained dark while repairs were made, not reopening until September 1.

By the late 1920s both of Brainerd’s theaters were being operated by Finkelstein & Ruben, who planned an extensive remodeling of the Park. When Paramount Publix took over the F&R interests in 1929, the project was undertaken by that circuit instead. The 1929 remodeling gutted the building, eradicating all trace of John Wangenstein’s 1901 interior, though the old fashioned exterior remained largely intact. The renamed Paramount Theatre opened on December 31, 1929.

The Paramount was taken over by Baehr Theatres in the late 1940s, and was closed in September, 1985. The Burlington Northern Railroad, owners of the land on which the Paramount stood, agreed to lease the theatre to the Brainerd Lakes Arts Center Incorporated in 1986, but the plans to renovate the theatre once again came to nothing. Despite having been listed as an historic site by the Minnesota Historic Sites Survey in 1971, the Paramount was demolished in April, 1994.