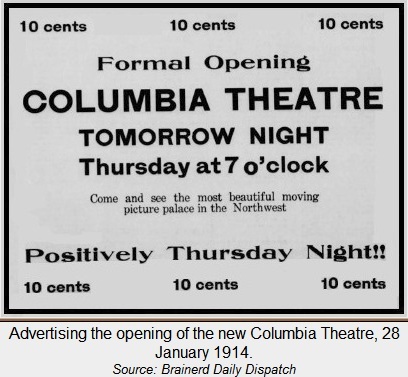 The theatre at the southeast corner of 6th Street and Laurel Street opened on January 28, 1914, as the Columbia Theatre, with 500 seats. The following year it was renovated with more spacious seating and reopened October 23 as the Best Theatre.

The house was remodeled again in 1920, reopening as the Lyceum Theatre on December 25. By 1928, the Lyceum Theatre and the Park Theatre were the only movie houses still open in Brainerd, both being operated by the Finkelstein & Ruben circuit. The F&R circuit was acquired by Paramount-Publix in 1929.

Publix expended a considerable sum on an extensive rebuilding of the Park Theatre, which reopened in 1929 as the Paramount Theatre, and the antiquated Lyceum Theatre was closed in October, 1930. The building was converted for retail use.