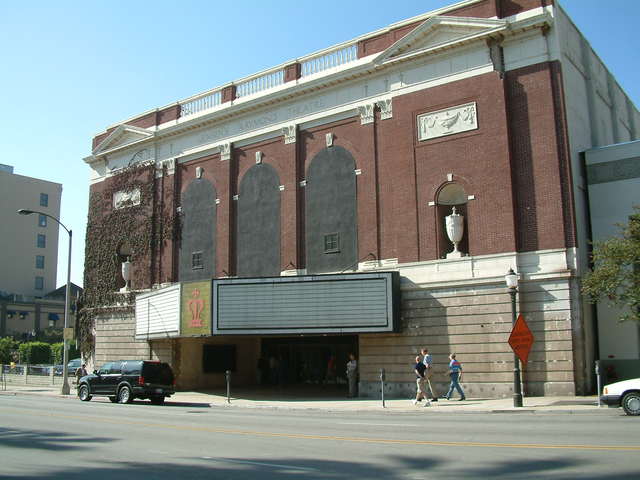 Jensen’s Raymond Theatre opened on April 5, 1921 and is designed in a mix of Adam and Beaux-Arts styles both externally and internally. It was the largest theatre to be built in Pasadena and was the second theatre to be built and operated by Henry C. Jensen & Sons. They were brick manufacturers who had branched out into the movie theatre business by first building the Palace Grand in Glendale. The Raymond Theatre in Pasadena was their second theatre and the third was in 1923, Jensen’s Melrose Theatre on Melrose Avenue, Hollywood (now a Ukranian Culture Center). They also operated Jensen’s Theatorium in Echo Park, date unknown, which is now a grocery store.

They also owned other properties including Jenson’s Egyptian Cafe in Glendale and Jenson’s Recreational Center, in Echo Park which is an apartment building that includes a 10-pin bowl.

Jenson’s Raymond Theatre was an unusual building, as it was one of only a few ‘ramped’ theatres that were built. The single balcony is reached via circular ramps, rather than the usual stairs. There were two boxes with bow fronts on each side of the proscenium, which oddly face outwards towards the audience. Delicate decorations on the barrel ceiling are highlighted by troughs of upward house lighting. One delightful feature of the theatre was the fire curtain which had a wonderful painting on it, donated by the Hull Motor Company, showing one of their models of a Hull car, pictured against a backdrop of Half Dome Mountain in Yosemite Park. The projection booth had an unusual location, being at the rear of the orchestra, beneath the balcony. Jenson’s Raymond Theatre was equipped with a 3 manual, 11 rank Wurlitzer theatre organ.

The Raymond Theatre opened as a vaudeville and movie house and was an immediate success. Henry Jenson and partners were often booking 6 shows per day to keep up with the demand. The Raymond Theatre was sold to the Crown Holding Corp. in 1948 and renamed Crown Theatre on February 13, 1948 opening with Larry Parks in “The Swordsman”. It became one of Pasadena’s top movie theatres until 1963. It was then sold to Bill Barkus who presented both movies and stage shows from 1963-1970.

It was then reportedly sold to Dr. Roth, who is the father of rock musician David Lee Roth from the band Van Halen. In 1978, the theatre was then sold to Mark Perkins who was a successful Pasadena businessman. He re-opened the theatre as a multi-use venue for the arts and renamed the theatre Perkins Palace.

The theatre was operated by Gina Zamparelli and it attracted big name stars such as Phil Collins, Bruce Springstein, Tina Turner, Bryan Adams and Fleetwood Mac and many others. It was also featured in many movies such as “The Rose”, “The Bodyguard”, “This is Spinal Tap” and it was the backdrop of many music videos including Whitney Houston, Phil Collins, Ringo Starr and others. It was the place where Gladys Knight, Van Halen, Motley Crew and others rehearsed before major world tours, and it even had its own television show “Rock N' Roll Tonight, Live from Perkins Palace”.

In 1988, theatre operator and concert promoter Gina Zamparelli formed Friends of the Raymond Theatre and she got word Mark Perkins was thinking of selling the theatre to developers Gene and Marilyn Buchanan. The Buchanan’s refused to hear of retaining the theatre for live entertainment.

Gina Zamparelli spent 20-years warding off the developer and his various proposals to redevelop the theatre. Friends of the Raymond Theatre effectively stopped the plans for the theatre becoming an office building, a modernized night-club and a hotel. Over 8,000 people from all over the world joined Friends of the Raymond Theatre to fight the developers plans.

Friends of the Raymond Theatre made 35 legitimate offers to the developer over a 20-years span, asking the Buchanan’s to sell the theatre and allow it to be preserved, the owner refused all offers and continued to increase the price with each offer to keep it off the market. The current owner (and would be developer) Gene Buchanan evicted the last operators from the building and it remained shuttered for many years, in an attempt to show the theatre could not work.

The City of Pasadena, who supported the developers plans, were sued twice by the Friends of the Raymond Theatre. The lawsuits were appealed to the appellate courts. Illegal demolition started despite the City having approvals from the developers that no demolition would occur prior to final permits being issued. In the final hour, as Friends of the Raymond Theatre were awaiting the courts answer to the stay on demolition that was filed, the developer (Gene Buchanan) drove a bulldozer through the side-wall of the theatre and demolished anything possible to make sure the theatre could not be saved.

The battle to save the Raymond Theatre won numerous awards, both local and statewide, including the “President’s Award” from the California Preservation Foundation’s for exceptional work in the field of historic preservation.

The building has been converted into apartments and retail use.

Here is an article which does a good job of describing the renovation project:

It sounds like a really bad retrofit to me, and by that I mean from a business standpoint. I’m not sure why the devlopers fought so long and hard for this particular building. There must be many other sites where they could have accomplished the same goals.

Second article from the bottom is on the Raymond, with a photo taken during the recent conversion:

More on the conversion:

As much as you may hate the outcome, you do have to have respect for a firm that can carry out selective demolition without completely destroying an old building. It looks like a very surgical operation.

Doesn’t look like things are going so well, especially if you consider that they may be listing units as sold when they have not been (to try and keep the place from looking like a grave yard):

It still looks like they haven’t sold the condos, after pushing so hard to destroy the theatre. Ha ha. Nicely done morons.

Gene Buchanan: sounds like his pre-mature destruction of an historic theater was all for naught. It’s sad, the Raymond was a beautiful theater.

While in High School, in 1972, I worked at this theater as an Usher, then Doorman and then getting promoted to Assistant Manager. At that time it was a part of the Lowes chain of movie theaters. This is a fact that has been omitted from the above narrative. While working there, I met a girl. She worked behind the candy counter and I thought she was the most beautiful girl I had ever seen (in all of my many seventeen years). I married that girl later that year, exactly one week after my eighteenth birthday. By then, I was a Private First Class in the United States Marine Corps with prospects of shipping out to Vietnam. It saddens me to know that this theater has been reduced to a ruin. Here in 2016, 44 years later, I still think that “Candy Girl” is the most beautiful girl/woman I have ever seen. She sits next to me as I write this.

A little more information about this theater: As it was built as a Vaudville Theater, it was necessitated that it accommodate the many actors of the shows. Below the stage was a long corridor with dressing rooms running along each side. In 1972 these rooms were relegated to storage. One of the rooms contained numerous cardboard barrels, each marked as “Civil Defense” supplies (relics of the peak of the Cold War). Inside these abandoned and very outdated containers were a “prepper’s” dream. Food, medical supplies and more. I wonder what ever came of these?

In the rafters above the stage (yes, I climbed up there) were elements of the massive pipe organ. This organ could play much more than just a typical organ. It could play the snare and bass drums, horns of numerous types and even bird calls/chirping. There were also stringed instruments that could be played via the keyboard. During the time I worked at this theater, there was an organist that came in every Sunday morning and “exercised” it just to keep it from falling into disrepair from lack of use. My favorite piece he would play was J.S. Bach’s Toccata and Fugue in D Minor. While exercising the organ, he always included playing each of the “rafter” instruments. Most of which were out of tune but still functional. The bird chirps sounded so real.

It really is a crime and shame that all of this is lost from the world. The Lowes Crown Theater (as I knew it) was a most incredible and precious piece of Americana. It should have been declared a National Treasure!