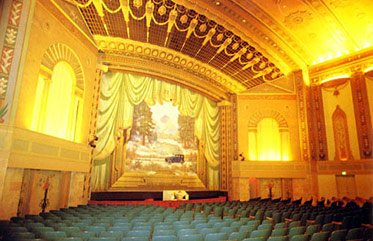 “Dear Friends of the Raymond Theatre:

We have very urgent news. Please see the overview directly below, and the expanded version for further details.

The developers have chosen to proceed with their project and “build at their own risk” BEFORE the court decides the outcome of our appellate case. If we win the appeal, the judge may impose a penalty on the owners for starting construction before our case has been heard.

Design Review is the last step in the planning process. If the city Design Commission allows the project to pass, building permits will be issued immediately and demolition of the interior of the Raymond Theatre and construction of the new project will begin.

We have legal avenues we can take IMMEDIATELY, but we will need to raise $5,000 before March 1st to take action.

After 16 years of work preserving the theater, we are now in our eleventh hour. If our supporters can donate enough money to allow us continue to legally defend the Raymond Theatre, we will. Without your immediate support, the Raymond Theatre will be gone forever in approximately three weeks.

Please see how you can donate below.

During 2004 we worked very hard to find an amicable settlement that would be a win/win situation for both the developers and the Friends of the Raymond Theatre. In short, we offered to relinquish all rights to our lawsuit and agreed to find a buyer for the Raymond Theatre and the adjoining parking lot. We offered find a buyer who would pay $4.0 million in cash. We requested eight months to complete this task.

At the time we entered the arbitration meetings, the theater was on the market for $4 million. The developers offered to sell us the theater for $4.4 million cash, with six months to market and sell the theatre/parking lot. We were also required to pay all brokers' fees, insurance, title, etc. In the end, the aforementioned costs added significantly to the total price of the theater/parking lot. The total price amounted to approximately $4.6 million.

We concluded that the price and terms offered by the developers was not a fair settlement offer but an attempt to set the price of the Raymond Theatre so high that failure would be inevitable. Eventually, we saw no alternative, the options in continue litigation were better than settling the lawsuit.

What came with the settlement offer was an ultimatum by the developers: If we did not agree to settle the lawsuit on their terms, they would 1) Not agree that they wouldn’t do further damage to the theater (since 1990, they have already caused approximately $3 million in damage to the theater) and 2) They would seek to gut the Raymond Theatre and build their apartment/retail/office complex BEFORE our case would be heard in the appellate courts.

The developers have hired an architect to design their project and we have been notified that Design Review of the project will be held in March, on a targeted hearing date of March 15. We will let everyone know of the finalized date as soon as we are informed.

WHAT IS DESIGN REVIEW?

Design Review is the VERY LAST step in approval process. The City Design Commission will review the developers' project and evaluate its design. If the design is approved, a building permit will be issued and the Raymond Theater will be gutted, almost certainly within the month of March. At the Design Review hearing we will have the opportunity to speak ONLY on design issues as the City has already approved the project.

WHY IS THE PROJECT BEING BUILT NOW?

The developers can legally build their project, even with a two court cases pending against them. Yet they are “building at their own risk.” If we win in court, the judge could remand a penalty for building before the appellate court case is heard.

HOW YOU CAN HELP

1) We need people to attend the Design Review hearing in March; we need speakers and people to be present to show their support. If you wish to speak or attend the meeting, please contact our office at:

2) We will hold a rally and press conference for the Raymond Theatre. Celebrities will be on hand to defend the theater in the media. As soon as a date for the rally is confirmed, we will let our supporters know.

SINGLE MOST IMPORTANT ACTION NEEDED TO SAVE THE RAYMOND THEATRE

We can take legal action that can stop contruction. To do this, we will need to raise $5,000 in three weeks! We have done it before and can do it again. There is no time to fundraise and so we will have to depend on our supporters online to donate. If we raise enough, we will take legal further legal action; if we don’t, we will be unable to save the Raymond Theatre from being redeveloped.

Please give what you can now. This is our very last chance to save the Raymond Theatre!

HOW TO MAKE A DONATION:

You can mail your donation to:

We also accept payments at PayPal.com. Our account e-mail address is You can also make a donation directly from our website by clicking on the “donation” link.

Thank you for your continued support in preserving Pasadena’s Historic Raymond Theatre.

PS: KCET, Life & Times will be airing an update the segment they filmed last year with an update on the project. The program will be aired Wednesday, February 18th at 7:00 pm. http://www.kcet.org/lifeandtimes/index.php

PSS: The Pasadena Post Office, by mistake, closed our P.O. Box and sent back all donations to the sender sent to us over the past 10 days. If you kindly sent us a donation, we are sorry, we hope you will resend your donation. We still have the same P.O. box as always!

NO NO NO! We have to save this theater! Start a petition

Just Two Weeks Left in the Fight to Save the Raymond….

Came across your organization while searching on the Internet for potential sources of help in our campaign to save the Raymond Theatre.

Please read information that follows, and send it along to anyone who shares your organization’s appreciation for this important piece of theatre history. It is much the same as the February 18th appeal posted prior to this one, but TIME IS RUNNING OUT NOW!

On March 15th the City of Pasadena, California will attempt to grant permits to gut the interior of the Raymond Theatre (formerly known as Perkin’s Palace). Our 16-years battle to stop unnecessary development of the theatre to an apartment/retail/shopping center will be over.

Construction crews and engineers are inside the theatre now preparing for demolition.

The theatre owners (Gene & Marilyn Buchanan) are choosing to start building their project BEFORE the appellate courts make a decision on their proposed project.

We have a very good chance at stopping construction.

But we need $5,000 to take legal recourse to stop construction IMMEDIATELY!

Time is running out!

In less than three weeks the Raymond Theatre will be gone forever!

Please give what you can TODAY and send this e-mail to anyone you know that can help.

YOU CAN SEND DONATIONS…

Thank you.
Friends of the Raymond Theatre

Thank you for helping us protect Pasadena’s Historic Raymond Theatre!

The proposed project outlining the developers plan for the Raymond Theatre did NOT pass Design Concept Review (the first stage of Design Review hearings) on March 15, 2004.Â  The hearing was continued to April 12, 2004.Â

We still have a very good chance at stopping construction. However, we are still under the gun to raise the necessary funds to bring another lawsuit should the plans ultimately be approved.

People from all over the world have been making donations to help stop demolition of the Raymond Theatre.

In less than three weeks the Raymond Theatre will be gone forever!

Please give what you can TODAY and send this e-mail to anyone you know that can help.

Donations Can Be Made:

Thank you for helping us protect Pasadena’s Historic Raymond Theatre!

Donations to Friends of the Raymond are tax deductible, as allowed by law. We are a project of Spirit of the Sage, under Social & Environmental Entrepreneurs (SEE), a California 501 ©(3) tax exempt organization, tax identification # 95-4116679.

THis theater must be saved. It is a very imnportant part of our culture and history as well as well as a beautiful builiding. SOuthern California is losing a great deal of its history by destroying these theaters. This one must be preserved.