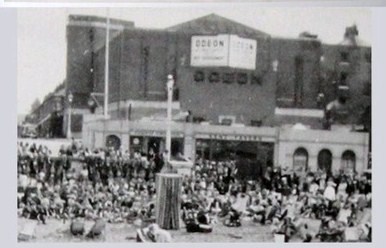 Built for Oscar Deutsch’s Odeon Theatres chain this opened as the Odeon Theatre on 2nd November 1936 with Will Hay in “Where There’s a Will”.

It was designed in an Art Deco style by Andrew Mather who provided an auditorium on a semi-stadium plan (with a raised section at the rear instead of an overhanging balcony) that had seating for 518 in the stalls and 456 in the circle. The exterior was quite attractive, with a corner tower entrance in brick, that had a large square window feature edged in white stone that had a decorative metal grille and a large ‘O’ for Odeon.

This Odeon was one of a group that was sold by the Rank Organisation to the
Classic chain of cinemas in December 1967 and re-named Classic Cinema. In 1982 Classic Cinemas were taken over by Cannon Cinemas and it was re-named Cannon Cinema, and 15,000 GB Pounds was spent on modernising the cinema in 1985.

It closed on 8th October 1987 and at the last show youngsters in the audience, angry about the closure, set off fire extinguishers and hurled seats across the auditorium. It was demolished in February 1988 and a block of sheltered housing flats was built on the site.