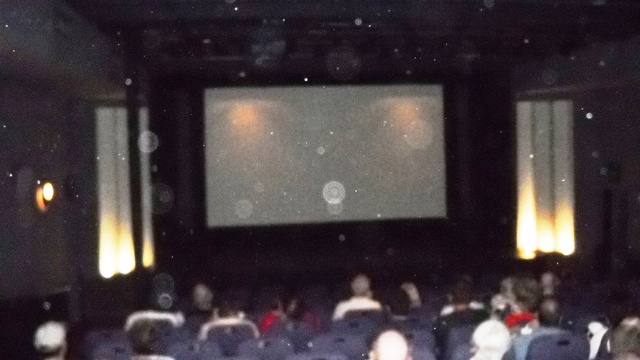 The tide has turned. Out of the “remnants” of an old carpet warehouse, the Key West Film Society has built a beautiful, intimate triplex with 250 seats, opening in 2004. The theaters show first run and art features.

The Tropic Cinema is THE place to see movies in Key West.

Here is a contemporary photo:
http://snipurl.com/vx1u

A most romantic view,
View link

The Tropic Cinema is located about a ½ block off of Duval and is immediately recognizable by both its neon sign (in a style that is definitely a throwback) and pastel color scheme, so perfect for a sub-tropical setting such as Key West. Inside, to your right, is the ticket booth, and if you must wait a few minutes for your ticket, it’s no bother because it’s a delight to be in the cool air conditioning and out of the heat. There are usually one or two people working at the cinema at any one time, it seems, and they pull double duty, selling tickets at the front and then running back to the concession stand. To your immediate left is what will soon be another auditorium in the theatre, though it isn’t complete as of this writing (it will be housed in a former “As Seen On TV” store, which closed down, the space bought by the Tropic owners for expansion). Beyond is a seating area, with small round tables and retro-style, wood-backed metal chairs, leading to the concession stand and separate “preparation” area (featuring an array of a dozen or so powdered popcorn toppings, such as ranch, popcorn salt, butter-flavored salt, cayenne pepper, etc., straws, napkins). The concession stand features not only the standards (sodas, popcorn, candy, and at surprisingly reasonable prices, though they don’t seem to offer free refills, unlike the big chain theatres) but an impressive list of wines (sold by the glass or bottle), beers, frozen ice cream treats, and a line of products from a Key West health-food place called Help Yourself, which seem to be quite popular. (When you order your popcorn, be sure to indicate if you do NOT want butter – or if you only want a little – because butter-flavored topping [i will assume they’re not using the real stuff but could be wrong] WILL be added and generously so!) The staff is very friendly and welcoming. Beyond the concession stand lies two directions: straight ahead, up a small flight of steps, is the Carper (each auditorium is named after someone), the largest of the auditoriums at the Tropic and where they feature their “biggest” film. The Carper is also the most imaginatively decorated, with a definite Art Deco feel and lush purple throughout, including the seating; a narrow performing ‘stage’ in front of the screen is perfect for those times where there might be a question-and-answer time with filmmakers and actors from a particular film (such as is the case, as of this writing, with a small indie film called “Hannah Free”, starring Sharon Gless [“Cagney & Lacey”, “Queer As Folk”, etc.]. Down a winding, slightly rising corridor beyond the Carper lie the Taylor and the George auditioriums, which are significantly smaller than the Carper. (The Taylor, in fact, is small enough to very nearly suggest a larger deluxe cinema-style home theatre!) These auditoriums are also far less decorated than the Carper but the corridor leading to them is decorated not only with local artwork but large, romantic posters of yesteryear stars (Gable, Katherine Hepburn, and so on).

As a touching gesture, on the back of each theatre seat is a small plaque with the name of a person or business which donated money to help build the Tropic Cinema. (This touch even extends to the toilets in the rest room!) Names are also displayed in a piece of local metal artwork made especially for the theatre to display.

Befitting a theatre borne from a film series held at a local, non-theatre establishment, the movies at Tropic definitely lean towards the independent or arthouse, with at least one mainstream feature available, though unless it is particularly popular (like, say, “Julie & Julia”), it’ll be there only one week, it seems. They also feature, quite prominently in their local ads, a Saturday staple, “The Key West Picture Show”, a 40-minute 1977 documentary spoofing the style of travelogues from the 40’s and 50’s, which is required viewing for anyone eager to find out what Key West was REALLY like before it became a T-shirt shopper’s paradise. On Mondays, there is their “Classic Films” series, where an older film is featured in the evening. For children, Saturday also brings with it a free series of films for the kids. Don’t expect “the usual” (Disney classics or the latest Spongebob or Barney); instead, you will find gentler short films, with (according to the promotions) “no replicable bad behavior, no violence or sexual situations…”, etc. This series seems to be wildly popular, judging by the amount of families on hand!

Very surprisingly, too, it is – as cinemas go – inexpensive for tickets! Most arthouse theatres seem intent on gouging you at the ticket booth (see The Ritz Theatres in Philadelphia, PA) but the management here really do seem to want good, quality films to be accessible to EVERYONE, a most refreshing change. Toss in the reduced prices for “The Key West Picture Show” (which I’ve been told will “be here forever”) and the Monday Classic Movie Series and the free admission to the Family Film Series and you really cannot beat the experience at the Tropic!

The Tropic truly represents a beacon of light in the world of cookie-cutter, by-the-numbers movie chains, and its popularity in the area (mainly by locals, it seems; perhaps tourists don’t notice it? Or, more likely, don’t care?) is a real reason for joy. Whether you live here in Key West, or you are just visiting, I cannot urge you enough to make time to pay a visit and support this terrific endeavor.

I’ve a question, if anyone can answer it: at Eaton and Simonton, about a block off Duval, heading away from the Tropic, is a long-closed movie theatre which is, right now, unoccupied. Does anyone have any idea the name of this forgotten cinema? Can anyone tell the years it was in operation and, if possible, its history? It doesn’t seem to be listed among the Key West movie houses here.

Well, folks, that butter topping I wasn’t too sure about? REAL BUTTER. Can you imagine?? Honest-to-goodness real butter! Their fresh-popped popcorn – none of that pre-popped stuff others use – is delicious plain but the butter makes takes it to another level entirely.

Also, they have now opened a fourth auditorium, the Peggy Dow, located near the entrance to the main lobby.

And as for the staff? Volunteers! Think about this: when’s the last time you encountered staff who are at work because THEY WANT TO BE? They really love this place and that loves shines through very clearly.

I can’t urge you enough to visit the Tropic…OFTEN!

The Tropic is a great little cinema and quite a bargain to boot. Photos from 2011: Facade, Marquee

Felt like I should take the time and update my original entry here, made about 18 months back:

The ‘waiting’ area inside the lobby – where one can sit and wait for one’s movie to begin or just relax – has been redone and, in addition to the small tables and chairs it had before, now has a curving, blue, cushioned seat that extends for, perhaps, 10 or so feet and is incredibly comfortable, with big, puffy pillows to lean against.

Also redone is their concession area: no longer are the snacks and bottled drinks simply lined along the far wall at the end of the concession stand; candies are placed directly in front of the stand and to its side, with a cooler for bottled beverages and cold snacks down a bit. As you approach the concession counter you pass an island, with its black, sleek, curved design, now home to a Keurig (K-cup) coffee/tea maker. Gone, however, are the Help Yourself food items, though the managers are in talks with other small, local restaurants to provide some appropriate nibbles.
The Saturday Family Films series seems to no longer be there but the Monday Classics remain and are a real treat; each film is led by someone who tells a bit about the film, about its making, and the information substantially increases the enjoyment of the feature you’re about to see.

The prices for admission HAVE risen, yes, but only a small amount and even then it’s still worth it. (Let me take this opportunity to urge any and all residents – full or part-time – to take advantage of their membership, which provides TERRIFIC discounts!
Since I wrote my last update, I’ve become a volunteer there myself and continue to marvel at the great amount of love and care and all-out JOY everyone has there, not only for movies in general but for the Tropic in particular and the people who patronize the theatre. Being volunteers, it really IS “a labor of love”.

I also urge you to not only experience the Tropic Cinema but TO SPREAD THE WORD if you’ve enjoyed it! I work at Fausto’s Food Palace, just a block away from the Tropic, and am always suggesting to people – especially tourists – to try it, and why. It continues to be a truly, truly remarkable place.

My wife and I caught “La La Land” here yesterday. Pictures to come!

As one of the House Managers of the Tropic Cinema, I’m thrilled that as the 2018 Oscars approach, we’re currently showing 5 of the 10 nominees for Best Picture: “The Shape of Water”, “Phantom Thread”, “Three Billboards”, “Darkest Hour”, and “The Post”. (Collectively, 34 nominations in all!) And, as always, we’ll be having our annual Oscars Gala, which is huge fun and promises to be as equally successful as our previous years' festivities!

We continue to feature what we think is the best popcorn you’ll find at ANY cinema – served salt-free – AND as much REAL, honest-to-goodness butter as you wish. An extensive – and FREE – popcorn seasonings bar (with blending bags to make it taste even better!) is on hand, too.

Also on the menu are Chocolate Chip and Oatmeal Raisin Cookies, fresh-baked every day and a quarter-pound each!