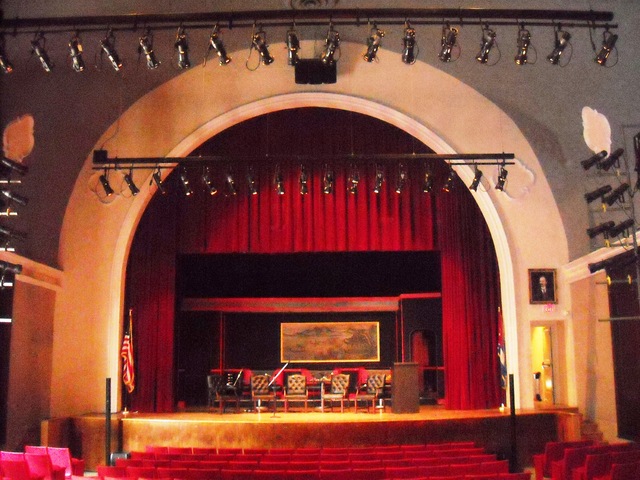 The San Carlos Theatre was opened in 1924.

The San Carlos was home of the San Carlos Institute, founded in 1871 by Cuban exiles. It was built in 1924 to replace their former home which was destroyed by fire. The architect was Francisco Centurion, and the style is Cuban baroque. In 1981, the building was closed after part of the facade collapsed, hitting a tourist. It was restored in 1992, and serves as a museum, library, art gallery, theater and school.

I’ve found this theater referred to as the Palace in Boxoffice as far back as 1937, but never more recently than 1951. The July 11, 1953, issue of Boxoffice ran an article about the Palace being renamed the San Carlos Theatre when a major remodeling and expansion of the house had recently taken place. The theater was operated by Miami showman Milton Frackman and his local partners, A.W. Castro and Gerald Abreu.

Among other changes to the theater, a small shelf balcony had been enlarged into a full balcony, increasing the theater’s total seating capacity from a little over 600 to 825. The article did not give a name for an architect of the remodeling, but the decoration was by Eugene Vitanza, of Miami. An interesting sidelight mentioned int he article is that Ernest Hemingway occasionally attended this theater when he lived in Key West.

The last of the partners who had operated the San Carlos since the early 1950s, Gerald Abreu, gave over the operation to Marshall & Rode Theatres of Cherry Hill, New Jersey, in 1968, according to Boxoffice of April 15 that year. That’s the last mention of the San Carlos I’ve found in Boxoffice, and I’ve been unable to find the house mentioned under its later name of Cinema II at all.

For a while it operated solely as a movie theater, but now it has embraced all its former functions for the community. So the theater has apparently lost some space.

It was closed (and supposedly boarded up) the whole time I was in Key West, but I distinctly remember walking past and the front door ajar. Can’t recall if I poked my head inside or not. I remember being curious about the place, but the people hanging around were less than reputable. Key West was like that…

Thanks for that link to the Movies Made in Key West site. I also remember Capt Tony giving out posters for “Key West Crossing” in his bar. This would have been late 78, early 79. I looked for it, but never saw the movie come out.

I misstated the original seating capacity of the Palace in my comment above. That line in paragraph 2 should read “…increasing the theater’s total seating capacity from a little under 600 to 825.” The article said that “about 250” seats had been added in the remodeling. The figure currently at the top of this page (571) was probably accurate for the Palace. I’m guessing Bryan found the theater in the listings in an FDY published before the 1952 remodel and renaming.

The original architect is named in my first post.

Here is a photo of the San Carlos when it was the Palace Theatre and sported a very slick Art Moderne marquee.

Here is a later photo (probably 1961) with the San Carlos marquee on the building.

There was another San Carlos theater in Key West before this one, owned and operated by James Harold “Harry” Burgert, one of the Burgert brothers family of photographers. Maybe it operated in a different building. It was in operation from as early as 1911 to 1912 and featured moving pictures and vaudeville acts. See about halfway down this web page, in the section about Harry Burgert. http://www.tampapix.com/BB3.htm. There are ads there for this theater, but they don’t give the address.