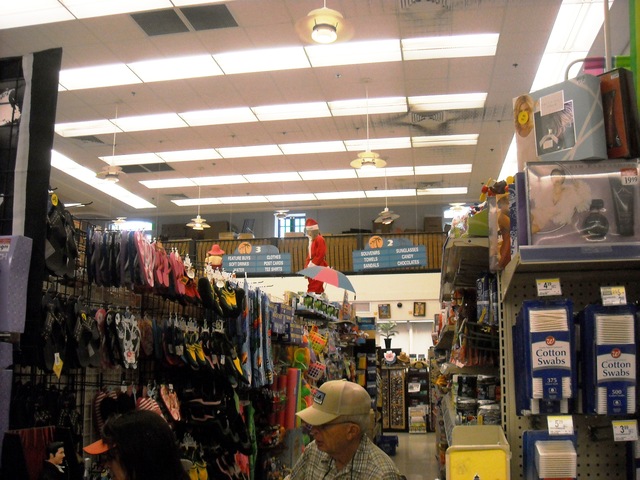 The Strand Theater opened in the early-1920’s and became the home of the Ripley’s Believe It Or Not Odditorium in 1993.

The theater was sold in December 2001 and closed in April 2002. It has since become the another branch of the Walgreens pharmacy empire.

Many of the historic elements of the theater will be saved, however, including its facade, marquee, various aspects of the interior, the lobby tile, marble stairs, and wood floors.

It’s nice that at least the exterior was preserved.

I worked at the Strand in ‘71 at the concession stand. My best friend worked in the ticket bubble. The concession had a window opening directly on the street so people would come by and visit and I could see all the people “crusing” What a blast back in those days!!! Does anyone know what happened to that ticket bubble? It was allready vintage in '71. The Strand was a “B” theater by then and the movie I remember distinctly was the “Last House on the Left”. Scary ! The Strand did have a balcony.

There was little to nothing left of the Strandâ€™s original interior when Ripleyâ€™s decided to abandon the theatre and move down to the east end of Duval. Walgreenâ€™s put a considerable amount of money and effort into restoring as much of the theatre as possible. 2010 photos of the faÃ§ade and the marquee.

The Flickr photostream of the Florida Keys Public Libraries has three interesting vintage photos of the Strand.

This 1960 photo (the year “September Storm” was released) was taken for the local property appraiser’s office, and the caption says that the Strand was built in 1924.

However, this photo from the early 1920s shows the theater with the same basic form, but a rather different style of facade. The caption of this photo dates it to 1922, but the movie on the marquee was released in 1921. A banner over the entrance says “Our First Birthday,” so perhaps the theater opened in 1921 and brought the same movie it opened with back for its anniversary in 1922. Or perhaps the caption is wrong, and the theater opened in 1920 and had its anniversary in 1921, when “The Man From Lost River” was released.

In either case, the Strand was clearly operating before 1924, but equally clearly it had a rather extensive remodeling done to its facade, probably within a few years of its opening, going from what looks to me like a stripped-down version of American Art Nouveau, to the much more ornate Mannerist-Spanish Colonial style it retained throughout the rest of its history.

What prompted the early remodeling I don’t know. Maybe the original theater was destroyed and only the front wall survived to be incorporated into a rebuilt house, with the addition of a new parapet and decoration, though I haven’t been able to find any references on the Internet to such an event.

The third photo is this color postcard, a nocturnal view of Duval Street with the Strand’s marquee in the foreground. The postcard is undated, and there is no movie name on the Strand’s marquee, but the San Carlos Theatre can also be seen, down the block on the other side of the street, and in the largest size of the photo the name “Give a Girl a Break” can be read on it’s marquee. That movie was released in 1953.

Did the Strand Theater have an organ? I can’t find any mention of one.

As evidenced by the interior picture, there is really nothing left to suggest it was a movie theater at one time. The exterior has been wonderfully restored, though.

I am told the ticket booth was also used by Ripley’s.

I saw The Band there, without Robbie Roberson, in the early eighties. Also buddy rich. I came across this looking for the date. A Walgreens! Really?

Howard I just saw your post from March 15 and yes it was. I was in Key West for 4 hours in 1998 on a cruise stop. If I can find my pictures I will try and upload them. It was awesome because it still looked like a movie theater?