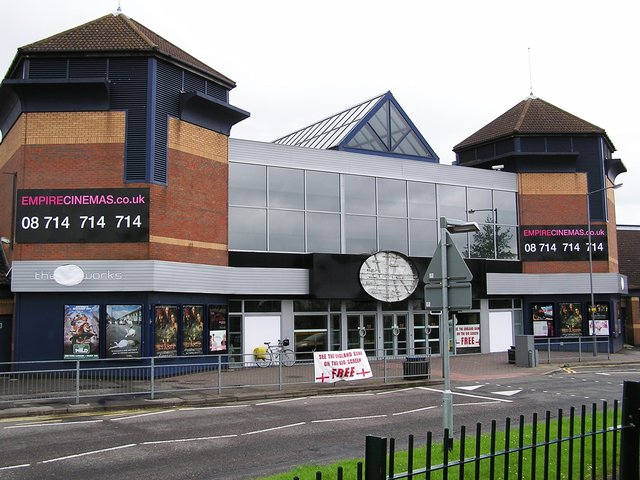 Opened as the Wycombe Six on 25th July 1987, this 1,750 seat capacity multiplex was operated by CIC, and it was built to replace the ageing Frogmoor Cinema in the centre of the town, as well as the Odeon Castle Street. It is located in Cressex, which is on the outskirts of the town, near Wycombe Air Park at Booker. This cinema has a Ben & Jerry’s ice cream parlour, as well as a bar and an American style restaurant.

It was transfered to the Filmworks company, followed by UCI and then Odeon Theatres. Empire Theatres took control in October 2005.

Yeah thatâ€™s pretty much how I vaguely recall see it. It had fabric for the amazing sonic acoustics of stillness it was like no other, propose made THX certified screen.

Iâ€™m pretty sure the surrounds was placed behind the fabric as theyâ€™re no sign of them when I saw Arachnophobia.

I can picture the crappy wall paint on the concrete I guess Empire cinemas are now into crappy cheap fast digital waste of time cinema with fake 3D.

the refurbishemnt that removed the THX screen was done in 2002 by UCI.

As far as I know the refurbishment had nothing to do with the removal of the THX equipped sound system in screen 1 (which later was re-numbered as screen 3). The cinema had already lost it’s THX certification prior to this. THX would send one of their engineers over from America once per year to test that the system met all of its very strict criteria. They advised that this was not the case and outlined all the works that needed to be done by a certain date and as this was not they lost their certification and could no longer advertise themselves as having a THX certified auditorium.

Such as shame as it was one of only a few cinemas that had a THX equipped auditorium in the whole of the UK. The THX engineer said, with the exception of the purpose built private auditorium at Planet Hollywood, Leicester Swuare in London, it was the best THX sound system in the UK.

Screen 1 was also one of the first auditoriums in the UK to be equipped with DTS and Dolby Digital sound systems (1993) and also had a 70mm projector.

The side and rear surround speakers were installed inside what looked like black wall pillars.

Albeit the loss of the THX certification wouldn’t exactly result in the “removal” of the THX “sound system” (or more specifically the “B-chain,”) the only equipment THX supplied was the THX active crossover for the screen speakers. AFAIK the active crossover circuits were on cards (installed in the THX rack mounted unit) leased from THX.

Multi-chain cinemas (Cineworld, Vue, Odeon, Empire etc) don’t seem to supply very much if any information about the sound systems installed in their various auditoriums. Which is a shame as second only to wanting to watch a movie on their largest screen, I’d like the best quality sound to accompany it.

And why has the UK not got an DolbyVision equipped auditoriums? Movies have been presented in this format for a couple of years now in the U.S.

The majority of the IMAX screens in the UK are also significantly smaller (especially the height) of ones elsewhere across the globe. Had a look at the IMAX screen in Cineworld, Stevenage recently and was very disappointed. I’ve seen larger non-IMAX screens, screen 12 of Cineworld, High Wycombe for example.

LARGE_screen_format: Responding to the relevant parts of your post on the “Odeon North Greenwich” page dated 2nd July 2018…

If I’m not mistaken UCI Wycombe 6 had identical seats as those you mention from the good ole days at The Empire, Leicester Square and I agree they were super comfy.

The only auditorium photo I can find of this cinema in its original state is one uploaded to Cinema Treasures. Very difficult to tell!

However, there is a photo available of another mid-80s CIC auditorium, namely the old Empire 3, which provides a better view of its seating; these seats do seem to bare some resemblance in form to the American Seating Company seats that were in the old Empire 1, although they have a headrest section.

Perhaps, then, those installed at High Wycombe were a similar model to those in the old Empire 1.

I was really annoyed when they were replaced with inferior seats some years later but could understand the decision to replace rather than refurbish due to cost implications.

Photo of an auditorium at Empire High Wycombe dated 2015.

Are these the ones that were installed for “the filmworks” overhaul? I assume the stadia was built then also?

I guess at that point the path of least resistance was to “skip” the old and replace.

If that’s how that auditorium looks today then it really needs a makeover—the seats are sagging and the carpet looks like it’s seen better days! (Maybe wet cleaning would be sufficient.)

I’m not 100% on the dates that ownership changed hands but unless I’m mistaken this cinema went through the following:

Unless I’m mistaken the super comfortable original red velour seats were all changed to ultra-cheap (plastic backed, barely padded armrest plus cup holders) around the mid-90’s. This was due to a number of the original seats being damaged or becoming tired looking and to have them refurbished would have cost too much.

One difference I have remembered between the original Wycombe 6 seats and Empire (screen 1), LSQ was that the latter reclined slightly (rocker style) when you leaned back. The Wycombe 6 seats did not, they were fixed. They did have headrests though and may well be identical to those you linked to from Empire (screen 2) LSQ?

Shame I didn’t take more photos back in those days. The backlit sign for screen 1 (This auditorium is THX certified) for example. I do still have one of the original ‘This Theatre Features DTS Digital Sound’ plaques somewhere from this cinema.

LARGE_screen_format: Hmm, I seem to recall that CIC was still around even after the name change—having a quick look through Companies House filings: UCI basically was CIC, AMC Entertainment (UK) Limited was renamed UCI (UK) Limited in 1989 following its acquisition by CIC/UA Multiplex BV. CIC (UK) continued to exist as an operating company but this starts getting into company structure spaghetti.

By the end of 1990 UA were no longer involved and the ultimate shareholders were MCA Inc. and Paramount Communications Inc., hence “UCI – A Universal/Paramount Company,” with UK subsidaries still directly owned by holding companies registered in the Netherlands.

Not sure when the former CIC sites changed their branding to UCI but certainly before the mid-1990s.

“the filmworks” was a UCI brand; going by the Cinema Treasures description and theatreofvarieties' earlier post on this page, the refurbishment was in 2002.

I can’t find any record of “the filmworks company” referred to in the Cinema Treasures description.

Odeon and UCI were acquired by Terra Firma Investments, Odeon & UCI Cinemas Group was formed, and High Wycombe was one of the divested sites acquired by Empire Cinemas in 2005.

One difference I have remembered between the original Wycombe 6 seats and Empire (screen 1), LSQ was that the latter reclined slightly (rocker style) when you leaned back. The Wycombe 6 seats did not, they were fixed. They did have headrests though and may well be identical to those you linked to from Empire (screen 2) LSQ?

Very difficult to find information on old seating products but I did find a catalogue (IIRC from the 2000s) with list prices for American Seating Company products. Far more expensive than I’d expected! That might explain why the seating, whether American Seating Company or not, but assumed to be of the highest quality, were replaced with cheaper models rather than overhauling the existing with replacement parts.

The “rocker” action of the old Empire 1 seats was absolutely fantastic, better than any other seat I’ve ever sat on!

Shame I didn’t take more photos back in those days. The backlit sign for screen 1 (This auditorium is THX certified) for example. I do still have one of the original ‘This Theatre Features DTS Digital Sound’ plaques somewhere from this cinema.

Backlit THX sign? Must have been a custom one?

One design concept introduced, as part of The Film Works rebranding, that I very much like is their “black box” auditoria to improve viewing. The auditoria at this cinema retain that interior look even after Empire Cinemas took over. During a movie, all ceiling lights are switched off, something that no other cinema chains that I visit seem to do. I’ve emailed both Vue and Cineworld regarding how distracting it can be to have to sit through a movie with bright ceiling lights remaining lit and their response is that they have no choice due to health and safety requirements.

How is it then Empire Cinemas do not have to obey these requirements?

The backlit THX sign outside the old screen 1 was similar in concept to this:

Screens 3 & 4 now have upgraded seats in the rear half of the auditorium. Seat count has been reduced from 355 down to 218 (+3 disabled spaces) which now consist of:

Uplift charges for these upgraded seats cost £2 for sofa/armchair and £4 for a recliner.

It is good to see Empire Cinemas reinvesting in this site as it has been many years since anything has changed. It would have been fantastic if they could have upgraded screen 3 (which was previously a THX auditorium many years ago) to IMPACT with Dolby Atmos surround sound. Look forward to trying out these new upgraded seats on my next visit.