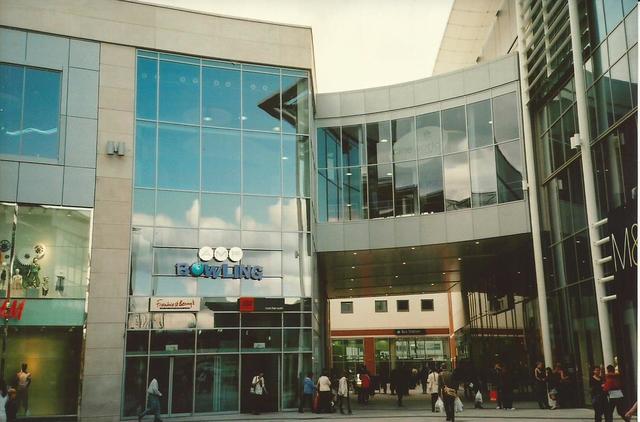 The 12-screen Cineworld opened on 14th March 2008 and is located in the Eden Shopping Centre. Seating capacities in the screens range from 690 down to 50.

Does anyone happen to know the screen size of auditoria 12 at this cinema? It’s the largest non-IMAX screens outside of London that I’ve visited.

This planning application would appear to be relevant as the previous application was outline only and the summary descriptions of later variation applications do not mention any changes to Block M1 (in which the cinema is located.)

Plans for the cinema auditoria can be seen in the document “ZONE M1 – LEVEL 30 – THIRD FLOOR PLAN,” available under the “Documents” tab of the above linked page.

(Incidentally, although they aren’t credited on the drawing, the cinema parts of the drawing look suspiciously similar to other drawings by UNICK, with the same “CAD library” disabled bay seats used, for instance; albeit it wouldn’t be a big surprise if they were indeed responsible considering that they claim to have been involved in the development of over 1/3rds of new build multiplexes in the UK!)

The largest auditorium on this plan is Auditorium 1, and the screen width as drawn measures about 22m (~72ft.)

The sidewalls are splayed towards the screen, so it’s not a rectangular auditorium, either!

No licensing plans appear to be available.

Having a look at Cineworld’s booking pages, the 13:30 performance of “The Incredibles” is in Screen 12, and the seating diagram matches that of Auditorium 1 in the plans, as well as having a VIP box seating option; clearly Auditorium 1 was “renumbered” as Auditorium 12.

Hmm, disappointing, I think, given that the space has so much potential? Time for a refurbishment plus Atmos, methinks…

Do you know what make the rear array speakers are? How is the picture/sound quality?

As always, thanks for providing such detailed info, that is some great drilling down you’ve managed there! ;o)

The picture and sound quality is good but not outstanding. I think the last movie I watched in screen 12 (largest auditoria) was Spider-Man: Homecoming in 2017.

Agree with you that this cinema could and is probably due a refurbishment (opened ~Easter 2008 unless I’m mistaken).

The four VIP boxes at the very back of the auditoria are not as great as they may sound. After watching Star Wars: The Force Awakens here, I popped into the leftmost box (as you face the screen) to check what they were like. Ceiling lights inside the box were on during the end movie credits. There was a lot of reflections on the glass (floor to ceiling) wall in front. Far more than I’d be able to cope with watching a movie. I am unsure if that is still the case when the ceiling lights are off? Each box has it’s own 5.1 surround sound system. None of the VIP boxes are located central to the screen which would be reason enough for me not to want to spend money on one of these tickets. The leftmost and rightmost boxes are almost right in the corners of the auditoria and as such one of the the worst locations possible imo.

Don’t know what brand the rear array speakers are but I shall try to get a closer look or ask a member of staff the next time I watch a movie there which might be soon.

A top-notch Dolby Atmos installation would and could be amazing given the size of this auditoria.

Not sure how well this cinema is doing compared to Empire, High Wycombe but I’ve rarely ever seen it busy or packed.

Having to pay for parking (it shares the same multi-storey parking as the rest of Eden Shopping Centre) is one of the reasons I don’t visit this cinema more often. Empire, High Wycombe for example has always been free.

Years ago, Cineworld introduced Bargain Tuesday, whereby all 2D movies cost just £3.95 all day on Tuesday. In response Empire Cinemas matched that deal (Sav£rday Tuesday) then also added Thursday. Prices were even reduced further over a number of years all the way down to £2.95 on Tues at Empire, High Wycombe cinema which was amazing value for an evening performance. Sav£rday Thursday was dropped (apparently because it didn’t attract enough customers) and the ticket prices on Tuesday has slowly increased since. Currently, *from £4.50 (dependent on site location). Still good value.

During this time Cineworld quietly dropped their Bargain Tuesday offering. Signing up (free) for a MyCineworld used to give customers 10% off online bookings and there was no credit card surcharge. The latter was dropped and now a MyCineworld account carries a £4.95 per year fee.

Obviously, any long-time customers who have got used to various promotions then seen them disappear over the years won’t be best pleased and the fact that this cinema has had no refurbishment that I am aware of over the course of a decade since opening doesn’t exactly make me feel like the increased cost of watching a movie here is money well spent compared to travelling to Empire, High Wycombe which is far easier and closer for me to get to.

As always, thanks for providing such detailed info, that is some great drilling down you’ve managed there! ;o)

They sound like an incredibly stupid idea to me, actually. ;–)

The rear wall should be heavily acoustically damped; having large areas of glass to reflect sound (and, even if to a rather modest extent relatively, image) back is not good for those in the auditorium.

Each box has it’s own 5.1 surround sound system.

Interesting. I can’t imagine this works too well, since the speakers won’t be in the correct location spatially?

It also obliterates one of the major benefits a large auditorium has over a living room (well, unless your living room has dimensions exceeding, say, 50ft.+ ;–)—namely, freedom from low frequencies being dominated by room modes (resonances.)

But then again, I can’t imagine that anyone booking seats in the boxes is too interested in optimum seating locations… ;–)

it’s a shame that there’s no VIP seat option outside of the VIP boxes (2/3 the way back as in most Vue cinemas).

Talking of which, IME, the position of the VIP seats in the Vue Xtreme auditoria I’ve visited are altogether too far back.

I’ve posted estimates of relative seating positions to the screen width for Vue O2 Finchley Road, and certainly that auditorium hardly qualifies as “large format,” if the criteria is based on the basic “classic” IMAX geometry standards. I guess “caveat emptor” with screens marketed as “PLF”!

Incidentally, apparently these “old” screen width to seating position ratio standards were actually based on tests using 35mm film in the 1950s (!), being set so that the audience would be far enough away from the screen such that the artifacts of film and projection thereof—i.e. grain, weave, etc.—would not be overly perceptible! Whereas, the “classic” IMAX standards are, I think, based more around creating an immersive system given human physiology/perception, i.e. in a sense the system is built more from the perspective of achieving a quality immersive experience, rather than around the limitations of an existent—and in the theatrical world now more or less obsolete—format.

Don’t know what brand the rear array speakers are but I shall try to get a closer look or ask a member of staff the next time I watch a movie there which might be soon.

Thanks. :–) I think they’re QSC, actually; I was confused as my initial thought was that they might be JBL, but the relevant model was not available when the cinema was built—and I can’t imagine the sound system was upgraded, without otherwise an overall refurbishment of the auditorium occurring, and even then I’d be surprised if they bothered to replace the rears (unless, perhaps, if upgrading to Atmos?)

Seems to me the area is overscreened, certainly on the basis of multiplexes per capita in the UK and the population of High Wycombe per se?

I can imagine that in the earlier days of multiplexes that the CIC/UCI High Wycombe would draw in trade from a wide catchment as, if I’m not mistaken, there was very little in the way of local competition.

I guess the idea behind Eden was to create a regional retail/leisure facility, but there’s competition on that front, such as the “new” The Lexicon Bracknell, which of course is also home to a Cineworld.

On the M40/A40 corridor, the Odeon Uxbridge IMAX and the fairly recently opened Cineworld South Ruislip would obviate the need (or possible even draw in business from High Wycombe and environs in the case of the IMAX due to the brand?) to head out to High Wycombe for the purpose of a cinema trip.

Regarding parking costs, planning policy effectively “forced” new leisure development to predominantly be in city/town centres. You can probably guess my view on those policies from the last sentence, but I’ll avoid further comment here as this isn’t a site for “political” debates—but suffice to say, with cinema ticket prices as they are, in most locations (i.e. not Central London and environs—and if one were crazy enough to park off Leicester Square, it would cost just as much as a premium cinema ticket at West End prices!) paying for additional parking charges doesn’t seem reasonable.

Shame that you aren’t able to get the off-peak discounts that were previously available. :–(

I’d expect Cineworld, across their entire UK estate, to have done their homework though? (I think their priority is on their “Unlimited” card…)