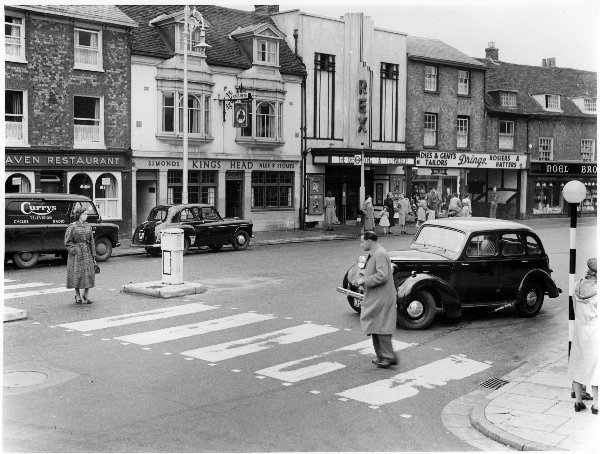 The Electroscope Theatre was opened as a cinema on 28th February 1912. It had an attractive facade with three niches, each contained a statue. Seating was provided for 750 in stalls and circle levels. It was closed in 1930, and left derelict.

In 1930, it was re-modeled into a small de-luxe super cinema seating 688 in stalls & circle levels. Reopening as the Rex Cinema on 13th December 1937 with Claudette Colbert in “I Met Him In Paris”. The re-model had been carried out to the plans of Kenneth Friese-Green, who was assisted by A.C. Yates. It now sported a modern Art Deco style.

The Rex Cinema was closed on 30th January 1965 with Yul Brynner in “Flight From Ashiya” and Stewart Granger in “The Secret Invasion”. It was demolished in 1969 and was replaced with shops.

Kenneth Friese-Green was the sone of William Friese-Green. One of the Fathers of Cinema.. Kenneth’s brother was Claude. The founder of Elstree Studios.. Kenneth’s son carried on running the Family company Modernisation Ltd., They did copus works during the Cinemascope installing era. John developed multi cinema conversions that where sound proof.. Un like those who tried to copy..

The singer Al Bowlly made his final appearance at the Rex on 16th April 1941. The following morning he was dead. The full story here.