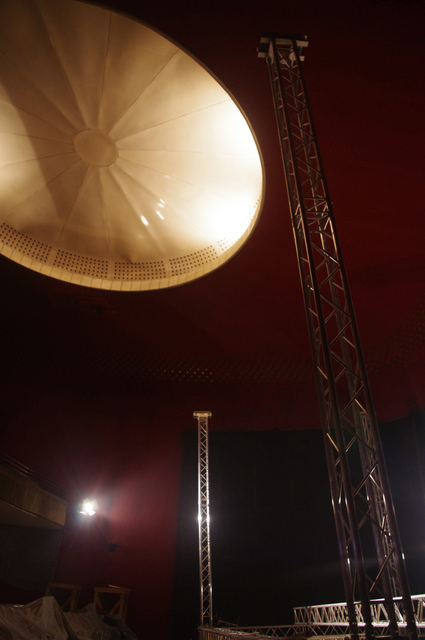 Located on the Buda side of the city, the Atrium Cinema apparently opened in 1933, although a book I have on the cinemas of Budapest gives a construction date of 1935, with an opening in 1936. It was designed by architect Lajos Kozma in a Modernist style. It screened mainstream Hollywood films in its 700-seat auditorium. By the 2000’s it was renamed Majus 1 Kino and was closed in December 2008.

It re-opened in Autumn 2012 as the Atrium Film Theatre, with a reduced seating capacity of 300 with a 11x13 meters stage. It now functions as a modern production house, with National and International theatre performances, contemporary dance shows, film screenings, classical & pop music events, educational programmes and weeekend childrens programmes.

The theatre is also available for corporate hospitality, private performances & press conferences as well as conferences, meetings and training days. The Atrium Film Theatre also has a cafe.

After a period of closure in 2011, it re-opened in November 2012 as the Atrium Film-Szinhaz.

Passed it last week and regret to report it seems to have closed, but probably not too long ago, as it remains in good condition. It might be just temporary. It is also not listed in the Budapest cinema listings.

A sign on the building might have been a “for sale” sign, but unfortunately I know no Hungarian, so I could not translate it or it might have been related to the apartments upstairs. Hunting through books in a Budapest bookshop, I came across a photo of the Atrium when new, this was dated 1933, rather earlier than is suggested above.

Well, “Kino” is the German name for “cinema” or “movie theater” or “filmszinhaz” or “mozi,” who even knows why this theater was re-christened as such?

I used to go there from the early 1960s through the late 1980s, during all of this time is was called “Majus 1 Filmszinhaz,” May 1st being the International Day of Labor and a national holiday in most countries of the world. No idea who re-named it into “Atrium Kino” and when, let alone why.

It was one of the first ones in the capital, and certainly the first one on the Buda side, that showed CinemaScope widescreen movies. Remember seeing Disney’s 1953 “Twenty Thousand Leagues Under the Sea” here in glorious 2.55:1 aspect ratio CinemaScope, wow!!

Too bad it is now closed, alas it’s just a reflection of the current sad state of the country as a whole.

Two photos of the closed Atrium Kino’s graffiti-scarred entry can be seen here and here.

Indeed the Atrium has been in a sorry state.

However, according to its new website here: http://www.atriumfilmszinhaz.hu/ the refurbished theatre opens in Nov. 2012. It can be found on Facebook under; Átrium Film-Színház

I read that it remains a fabulous Art Deco theatre but now seats 300 (as opposed to 700) and will, besides putting on vintage and art films, host theatre and other stage-related events e.g. dance, pecha kucha presentations, classical and popular music performances(Award ceremonies I could imagine too). Weekends are for kids and families, reports Budapest’s free ‘Funzine.’

Fortunately for us expats it will become the hub for English-language theatre as the Merlin Szinhaz over in Pest closed its doors I think in April. Parking for those who take their cars rather than the tram(!) will be best up the road at the shopping centre, Mammutt.

Absolutely can’t wait to take a peek inside. Will share photos once appropriate.

On Sunday 2nd Dec., I visited the recently re-opened Atrium to see a children’s show. Although it was billed as an English performance on the theatre’s Facebook page, it seems that informational content was quickly run through Google Translate, as the show was performed in Hungarian.

As for the theatre, truthfully I was rather disappointed. It’s had a lick of paint outside and inside, but this is really all. The theatre appears to have re-opened on those grounds, but in reality it badly needs renovating. The entrance hall was exceptionally cold, the double doors struggling to keep the chill from the street out, while the foyer itself was barely heated.

Within the dark and gloomy auditorium there was a great deal of mustiness, characteristic of a venue that’s been closed for years. Nothing has really changed other than all the seats in the upper balcony have been ripped out (thus the theatre capacity is down from 700 to 300).

I over enthusiastically booked seats before venturing inside the theatre for a showing of the director’s cut of Bladerunner on 21st December around midnight. I hope to make the most of the occasion!

In short, this is a great opportunity for a developer! If anyone is familiar with the REX Theatre in Berkhamstead (see: http://therexberkhamsted.com/), this represents what the Atrium could become. A facelift could work wonders.

Things seem to have improved, when I visited in November 2013 there was no mustiness and the theatre appeared open and used with a mix of film and stage performances. There is a history of the theatre on their website which shows (undated) magazine scans of the design with a claimed opened date of 1936 for the apartments and 1937 for the the theatre. Photos here:–