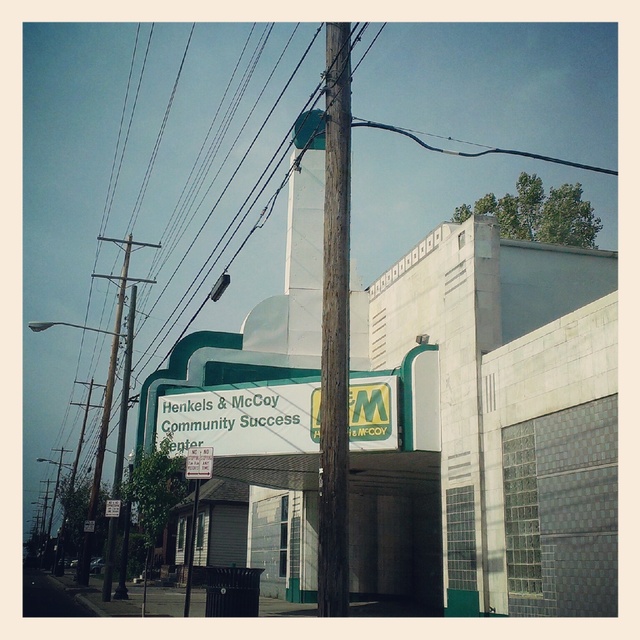 The Main Theatre was opened on December 25, 1937. By the time I moved to Columbus in 1968, the city’s Near East Side had become an impoverished area. This movie theatre was already closed, and probably had been for some time.

This section of E. Main Street has not improved since then. Much of it is now a wasteland of vacant lots and abandoned buildings. But the Main Theatre was reused as the ‘Main Street MedCenter’ for several years, closing in around 2005 and taken over by other practices. Its marquee and vertical sign are still intact.

This became the New Main Theatre on 11/10/1960, with the opening of CAN-CAN in TODD-AO. All seats were reserved.

Is it still used as a medical facility?

Referring back to a comment from Ron Newman in 2006:

“During at least some time in the late 60s or early 70s, I remember either this or the nearby Eastern Theatre (now demolished) being used as a nightclub or live stage. I vaguely recall it using the name ‘International Star Palace’. I hope someone else from Columbus can supply more information”

If I am recalling correctly, the International Star Palace nightclub was in the old Big Bear Grocery store a few blocks east of the Eastern theatre. This club was directly next to the grain elevator. That building was torn down and replaced by a Kidney Center.

Internet says that Henkels & McCoy is a Pennsylvania-based engineering and construction firm specializing in projects for the energy, water, and communications industries. There’s no indication of what they are using the Main Theatre building for. It might be anything from branch offices to an equipment storage facility.

Additional information on the Todd-AO conversion:

“Frank Yassenoff has taken over the Main Theatre from the Roland’s management and is converting its screen, projection and sound equipment for the display of films made in the Todd-AO process. The theater is now closed for remodeling, but will re-open early in November. "Can-Can” is expected to be the first attraction and it will be shown on reserved seat basis. The details will be announced later. The Main, 1336 E. Main, will be the second Todd-AO house in COlumbus. Hunt’s Cinestage is the other."

In going through the Columbus Dispatch archives from that time, I have only found records of CAN-CAN and KING OF KINGS playing at this theatre in 70mm.

The current occupant of this building is HUB Community Development Corporation: http://thehubcdc.com/

In 2006, Ron Newman asked about the International Star Palace. It WAS located in the Main Theater building in the 1970 time frame.

This opened on December 25th, 1937, the same day as the Drexel’s opening. Grand opening ad posted