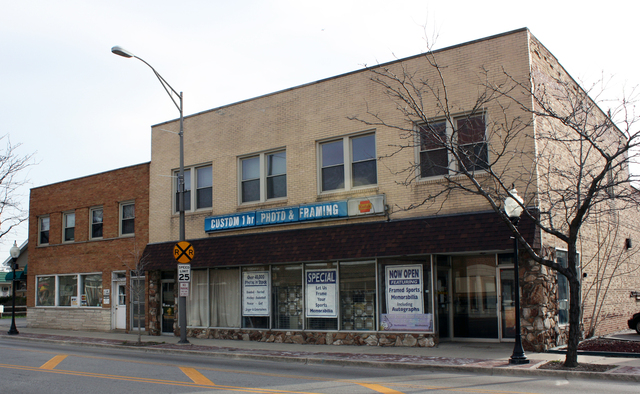 The Cass Theatre was opened in 1928. It was closed in 1930 and was used for graduations and occasional home talent perfomances by the American Legion & Boy Scouts. It was renamed Westmont Theatre in September 1933 when it reopened and was equipped for sound films. At one time it was operated by George J. Zulas.

The Westmont Theatre was closed in late-1962/early-1963 and was converted into a bank.

Here is part of a February 2009 article in the Chicago Tribune:

Louise Miller and Annette Edler are as close as sisters can be. Their sisterly adventures date back to the 1940s. Back then, they would clean their parents' house top to bottom for an allowance of 25 cents. It isn’t much by today’s standards, but at that time it bought each sister an entire Sunday afternoon’s worth of activity.

Miller and Edler would walk from their home just behind where the Great American Bagel sits today on Ogden Avenue in Westmont to the movie theater at 25 S. Cass Ave. They crossed a lot of empty fields on the way, but their parents didn’t worry about their safety. “In Westmont, you know, you didn’t lock your door. You trusted everybody,” Miller reminisced recently.

Once downtown, Miller and Edler spent pieces of their allowance one at a time: 5 cents for popcorn — with real butter — in a white bag; 10 cents for a kid’s discounted movie ticket; 6 cents for an ice cream cone after the movie. The sisters saw countless Hollywood classics at the Westmont Theater. “Abbott and Costello … Dale Evans … Gene Autry,” Miller recalled.

As the girls grew up, they discovered other pastimes, such as the roller rink, or baseball games. They were so busy moving on with life they never really took note of when or why the Westmont Theater closed. “We probably outgrew it,” Miller said, adding that she hoped I would be able to find out whatever happened to the old mainstay.

The Westmont Theater started as a business for the Zulas family, who bought the empty theater just after the Depression. In the beginning, an adult movie ticket — 15 cents before 6:30 p.m. — bought you two features, a cartoon, coming attractions and the newsreel, said Helen Zulas, whose late husband, Jim, wore the red blazer and black slacks usher uniform at the Westmont for years.
Young people and families came to the theater, and the Sweet Shop next door, to be in the center of the action in Westmont. When students graduated from nearby Central School, the theater would shut down for a day so the ceremony could be held there, Zulas said. After nearly two decades, the Zulas family sold the business to the man running the movie projectors, Charles Avgeris. The theater then became that family’s business, said George Avgeris, who took tickets from customers as a 4th grader and worked as an usher when he got older.

During World War II, moviegoers took special interest in the newsreels, which offered them a connection to current events around the world. “In those days, it was really busy. … For certain movies, we had to get out these velvet colored chains and block off people and everything,” Avgeris said. “Those were the great days of theater. Motion pictures. Before television. There really was no other entertainment.” But Avgeris' father and his business partner had a falling out, and Charles Avgeris left the Westmont Theater. A few years later, the theater closed.

The building stayed empty until it became the temporary location of the Bank of Westmont, which was building a new location down the street. The bank left the theater marquee up as it occupied the space. After the bank, the theater building became Raikes, a dime store. And after that, it turned into a Custom One Hour Photo and Framing shop, which it remains today, said Gerry Szymski, a lifelong Westmont resident.

There is a building at 25 S. Cass that houses a photo shop, but it’s unknown if this is the original theater building.

While waiting to bail a friend out of the Westmont pokey about 10 years ago, I read the history of Westmont on the station’s wall. Going from memory, it was apparently the highest point West of Chicago after the great fire in 1871. West Mountain, if you will.
With all wood construction being frowned upon after the fire, the stone & bricks that would help rebuild Chicago, were loaded onto trains in Westmont. So that gravity downward would assist in their travel Eastbound to Chicago. And now you know, the rest of the story. RIP Paul Harvey.

Two local residents are spearheading an effort to restore this theater to use as live music and performance venue: View article

This must have closed later than 1957 as my family didn’t move to Westmont until 1959 and I have memories of going there for at least a few years. I specifically recall seeing “King of Kings” starring Jeffrey Hunter (1961) at the Westmont theatre. For a short while, there was a slot car racing establishment there called Motorama. It was actually pretty popular, but died out fast like all crazes eventually do. It was a great hangout even if you didn’t have a slot car as they played top 40 music and had vending machines for snacks. I probably spent more money at the Raikes store there than anywhere else in town.

I grew up a block from theater. Remember when it closed The Blob with Steve McQueen stayed on marque for a couple of years. I also remember seeing Wake of the red witch with John Wayne and the first ten rows were roped off due to flood. It made the movie very realistic.

In the early 60s, there was a theater in Westmont which showed Russian movies, as well as some opera films. Since I lived in the city, I never got out there to see anything, enticing as the listings were.
Was this that theater?

I added a few articles from local papers about the Westmont Theatre which shows it existed as a cinema until late 1962 / early 1963 before the building was converted to a bank.