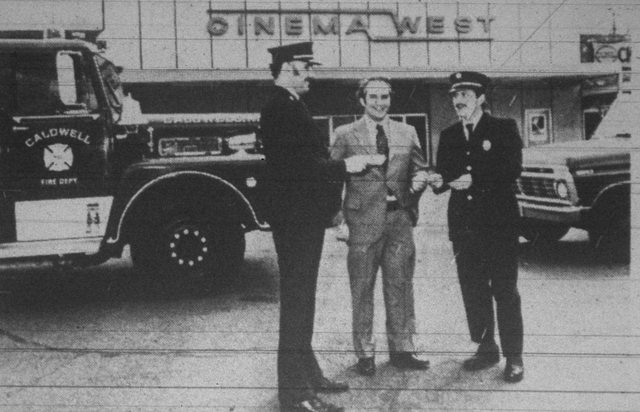 The Cinema West was opened February 10, 1971 with John Wayne in “Rio Lobo”. I worked at Cinema West in 1973. It was a small local theatre, shows changed weekly. Not a first run house by any means, just a nice family owned business. The theatre was very plain and box like. Simple lobby and candy stand, we popped our own corn. Typical of the theatres of that era, functional and efficient. It became a Blockbuster video store.

Now a Blockbuster Video in the center of one of the wings of the plaza. If you look at the rear of the complex you can tell which store was the theater.

Nice to see this house remembered with a listing in Cinema Treasures. Not a movie palace even by neighborhood theatre standards, but a well-run operation. I went there maybe half a dozen times in the mid-to late-1970s, and felt that the presentation (projection and sound, service, etc.) were on a par with many of the first-run venues that charged more per ticket. My last visit there was to see “Jaws” on its 1979 re-release; I had also seen it there around Christmastime in 1975, six months after the movie’s opening, and recalled that the theatre did the movie justice then. (The ‘79 “Jaws” showing also offered a rare opportunity to see a vintage Bugs Bunny cartoon on the big screen!) The theatre had closed by the time I began working in the area in 1983, and if I’m not mistaken the space that it had occupied went through several different tenants over the years.

I guess you could consider the movies at Blockbuster being second run, but the function should be retail.
http://tinyurl.com/9cloyt

This opened on February 10th, 1971. Grand opening ad in the photo section.