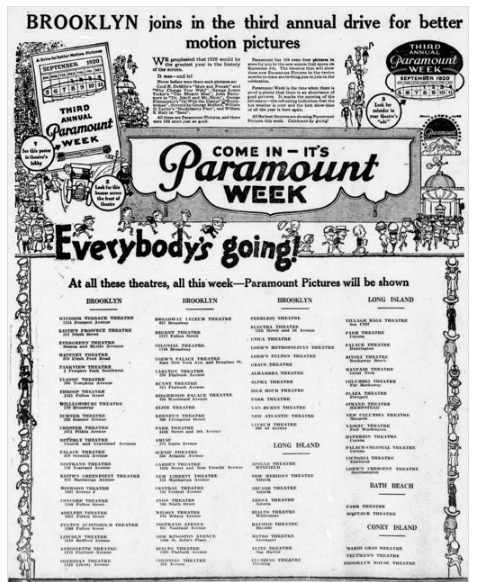 Horak’s Opera House was converted into the Arcade Theatre by 1914. It was one of Astoria’s earliest cinemas, and the nearest competition to the somewhat older Steinway Theatre. The Arcade Theatre also had an airdome that operated in spring/summer and was either adjacent to the 575-seat theatre or on the roof. Neither facility survived past the silent era. The premises were taken over for retail re-development. More information about the Arcade Theatre’s history, as well as an exact contemporary address for the site, are needed.

I agree, Warren. All indications so far (the archaic address conversion website; the C/O for a property across from that parking lot with an original 300-304 Steinway Ave address) seem to be that the theater was situated north of 31st. If you count in the 8 or 9 lots that I surmise would approximate the location of the theater’s site, that still leaves you very close to the 31st… most of those building lots are quite narrow.

There are no C/O’s available to view for that address on the NYC Building Department site, but the history of filings does note Alterations as early as 1923 – which would indicate work done to a pre-existing building. The “New Building” filings are not indicated in the online history, so we have nothing conclusive. Does an alteration in 1923 make sense for an approximate time frame for this theater’s demise?

So, the big parcel adjacent on the right of the 345 address would have most likely been the site of the Arcade auditorium.

As per this local.live.com view, there is currently a narrow one-story bulding on the 345 parcel identified in Warren’s map and a Modell’s on the spacy adjacent lot where the auditorium/airdome might have been situated. I guess only an on-site visual inspection of the exterior might determine if any elements of the old theater entrance remain. With all the passing years and history of alterations noted on the NYC site, I expect all traces have probably vanished – if indeed the structure was not at some point entirely replaced.

Warren is right about the parking lot having been P.S. #6, which I remember standing there when I was a kid in the 1960s, and I later recall them tearing it down in the late 1960s. I also recall the large store which is now Modells. It used to be a supermarket in the 1960s (I don’t recall the name), but I remember the unusually tall ceiling, so it can easily have been the theater in question. When a store is unusually large in Astoria, it was either converted from a theater (as the Steinway Theater became Lerner’s), or it was build that way for a chain store such as Woolworth’s and Genovese were on adjacent corner’s of Steinway & 31st Ave.

Thanks Warren, from the photo it appears to be the exact location of where Modells is today.

Yep, the Modells store was where the Arcade Theater stood. Thanks Warren. Even as a child when it was a supermarket and later a discount store I didn’t know it used to be a theater. Since it’s so large I’m assuming the structure was altered from a theater for retail purposes, as opposed to being razed.

Wow Warren, you really went digging for all that, didn’t you? You’re a plethora of information; thanks again.

This theater should not be listed as “demolished”, as it appears the building still stands.

This theatre was demolished in the 1920’s to make way for retail. It was originally Horak’s Opera House.

Uploaded a photo of an ad in the September 1920 Paramount Week indicating that the Arcade would be among the participants in a special exhibiting event.