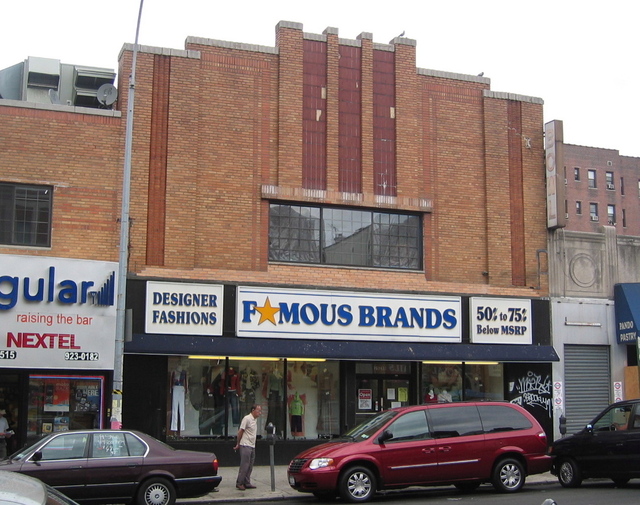 The Strand Theatre first opened on August 27, 1941, and was one of the last theatres built in Queens before the World War II ban on new construction. The auditorium was in the stadium-style, with a raised section of seats at the rear. I’ve often wondered why the Strand Theatre was ever built, since the Astoria section of Queens was already vastly over-seated at the time, with ten theatres including this one.

The building still stands, with the entrance converted to stores.

I wonder how much the theater cost to build in the first place compared to the renovation cost.

You beat me to it Dave.

Oh, sorry. I have Shorpy on Facebook, and it just popped up.

So based on Rickstar’s comments, if I understood correctly, the theater itself was to the left after entering the lobby? I recently went to The Strand Smokehouse, located three doors to the right of the theater entrance. The bartender was confident that the restaurant space was the theater location. It is a huge space. Great meats by the way. Any comments? Thanks.

joe1751: The bartender at the Smokehouse was mistaken. Look at Google’s satellite view of the block and you can see the roof of the auditorium extending toward Crescent Street, to the left of the theater entrance. The Smokehouse is in what appears to be former retail space. Its building’s roof is much lower than the theater’s roof was.

Thanks for the map suggestion. It all makes sense.

A few of comments here:

To the question of alignment, the entrance on Broadway and marquee/box office lead into the lobby/concessions. The screen(s) were to the left, parallel to Crescent Street. A turn to the right led to stairs to the bathrooms and balcony, which was sealed off in the final years, perhaps due to safety.

Strand closed as a duplex, but that may have been a later modification, it may have originally been a single screen.

The Arena was at the corner of Steinway Street and Northern Boulevard.

The Olympia, which started life as the Cameo, was on Steinway diagonally across from the Triboro. It was a lovely, modern space. I suspect the name was changed to the Olympia because of the large Greek population.

I lived in that neighborhood for years. I used to go to that store all the time, and I had no clue it had once been a movie theater. Wow!