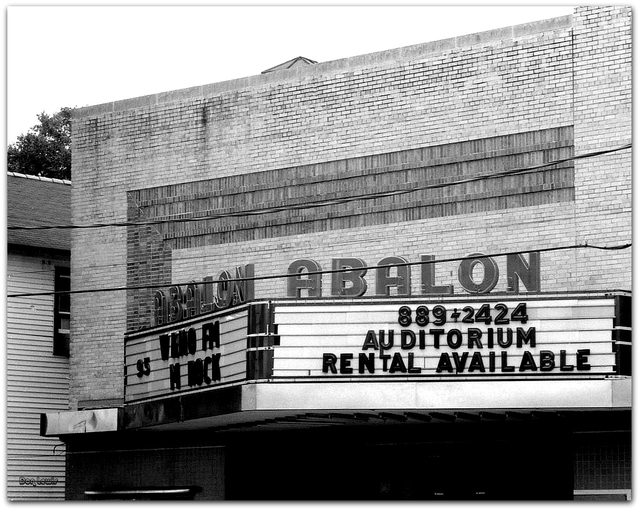 Opened in 1951, the Abalon Theatre was a brick building and had the typical marquee extending out with “Abalon” spelled out in individual block letters on two sides.

I have some photos from my black and white photograpy days that I am editing and preparing to post on my flickr site soon.

My b&w photograph of the ABALON sign in New Orleans.
www.flickr.com/photos/lastpictureshow/314074327

Just for the record the Marrero Drive In Theatre in Marrero, La., did have good long life. I was built in 1949 and opended in 1950 and ran until it closed in 1976. Drive In Theatres were starting to go out. I know because I was the one that owned it.

I sure do miss the Abalon Theatre, I grew up whatchin movie there in Old Algiers. It is now a church and has been for a number of years now.

This is now the New Home Family Worship Center of Algiers.

After being closed by United Theatres, the Abalon was dark for nearly a decade until Joseph Costello, owner of radio station WRNO, renovated and reopened the house as a venue for classic movies. A July 3, 1978, Boxoffice item about local protests against Costello’s plan to reopen the Abalon said that the theater was “…a thirty-year-old Algiers landmark….” A later Boxoffice item gave the opening year of the Abalon as 1951.

Boxoffice of April 2, 1979, quoted New Orleans movie and theater critic Al Shae’s comments on the renovated Abalon from his review of “Harold and Maude,” then playing at the house: “The new-old Abalon Theatre is the ideal setting for this fine film. The large 665-seat theatre is as clean as a whistle with expensive Dolby sound. Spacious, deeply cushioned chairs are comfortable with nary a bad seat in the house.”

The Abalon was still operating in 1983, when Boxoffice ran an article about Joseph Costello (He Went Into Films On His Ear, left column, right-hand page.) This article said that Costello, who had begun his career as a disk jockey, had presented live concerts by major rock bands at the Abalon, and frequently offered combined shows featuring movies and live performances by local bands. He also expanded his interests in exhibition, opening several additional theatres so that, by 1983, he operated more screens within the city of New Orleans than any other exhibitor.

THEREâ€\S ONE IN YOUR NEIGHBORHOOD
The History of the Neighborhood Theaters in New Orleans
is being written by 89-year-old Rene Brunet, the dean of the motion picture industry in Louisiana, and New Orleans historian Jack Stewart. The 160-page,coffee table book will be released in November and is being published by Arthur Hardy Enterprises, Inc. Attention will be focused on 50 major neighborhood and downtown theaters, culled from a list of nearly 250 that have dotted the cityâ€\s landscape since the first â€œnickelodeonâ€ opened in 1896 at 626 Canal Street. The book will be divided by neighborhoods and will open with a map and a narrative about each area. Each major theater will feature â€œthen and nowâ€ photographs, historic information, and a short series of quotes from famous New Orleanians and from regular citizens who will share their recollections.
YOUR HELP IS NEEDED
We are trying to acquire memorabilia and additional photos of this theater for this publication. (deadline July 1.) You will be credited in the book and receive a free autographed copy if we publish the picture that you supply. Please contact Arthur Hardy at or call 504-913-1563 if you can help.

A photo of the Abalon Theatre in New Orleans.