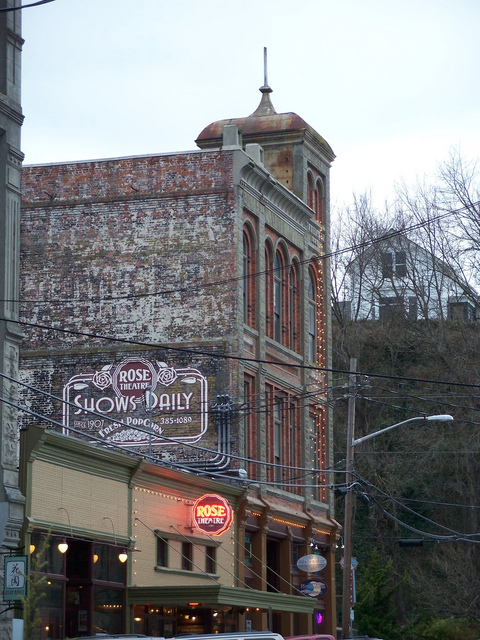 The Rose Theatre is on a side street and a little hard to find, but what a gem!

The Rose Theatre’s website has been revised. Now there are many pictures of the beutiful interior, history and more.

My family & I visited Port Townsend and the the Rose Theater last week and saw Hairspray (2007 version). What a find! The theatre is beautifully restored and the sound (Dolby Digital) and picture were fantastic. Much better than our new, local Cinemark at home in Texas. The movie was introduced by a staff member and the whole experience was perfect. If you’re in the area, I highly recommend checking this one out.

The Rose opened in 1907 on Water St. and moved to the Taylor St. location the next year. It closed fifty years later, the last film was ‘High School Confidential’ It reopened July 11, 1992 and expanded 3 years later with the 83 seat Rosebud theater. In 2013, for the Port Townsend Film Festival, a third screen was added, taking over an unused banquet room next door. The Starlight Room is a 21+ venue, featuring appetizers & cocktails from the Silverlight Cafe. It is a Living Room layout with room for forty five people.