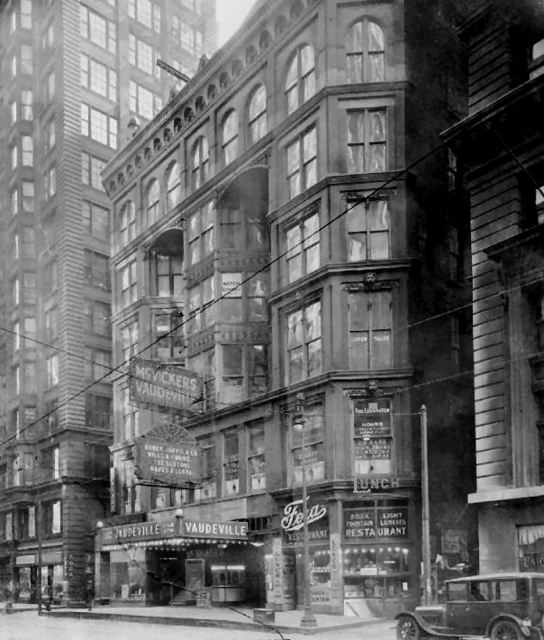 There was a McVickers Theater in Chicago for a large part of the city’s history.

When the orignal McVicker’s Theater opened its doors in 1857 on W. Madison Street near S. Dearborn Street, the city was celebrating its 30th anniversary. It was built by Chicago actor and producer James H. McVicker (1822-96) at a then-staggering cost of $85,000 for legitimate theater. McVicker had been part of John Blake Rice’s theater company during the late-1840’s at Rice’s Theatre (which stood near the corner of Randolph Street and Dearborn Street).

The first McVicker’s Theater was completely destroyed in the Great Chicago Fire of 1871, but was rebuilt the following year in an even grander style on the same site. In addition to legitimate theater, it also began to feature opera and minstrel shows.

The Jones, Linick & Schaefer circuit acquired the McVicker’s Theater in 1913, and began presenting “popularly priced” vaudeville acts along with motion pictures there, and it was known as McVickers Vaudeville. In 1922, this McVicker’s Theater was demolished to make way for yet another McVicker’s, which was designed by the firm of Newhouse & Bernham.

Opened October 26, 1922, this last incarnation of the McVickers Theatre (the apostrophe in the spelling of the theatre name dropped around this time) seated well over 2,000 and featured motion pictures and, at least early on, live entertainment, as well. The Balaban & Katz chain took over the McVickers Theatre from Jones, Linick, & Schaefer in February of 1926. Jones, Linick & Schaefer took over the theatre again in December 1934 and continued to operate into the early-1960’s. In 1962, the theatre was leased for a 13-month period by Martin Theatres.

The theatre’s facade, resembling an ancient Athenian temple, with its chunky Ionic columns, pediment and freizes depicting mythological creatures and heroes, also had a marquee stretching the full length of the building along Madison Street, as well as an enormous vertical sign, rising above the building’s cornice.

In 1960, CineMiracle came to the McVickers Theatre with the film, “Windjammer”. For a brief time in 1962, live theatre returned again to the theatre before movies were shown again, with “The Wonderful World of the Brothers Grimm” in Cinerama. The 3-camera system was removed a year later and 70mm films were brought back in.

By the 1970’s, the McVickers Theatre began showing mainly kung-fu, horror, and blaxploitation films. Later, adult films were added to the mix. The theatre was shut down by the city in 1971 for various code violations, but soon was reopened.

The theatre finally closed in 1984 and was torn down in 1985, a sad and inglorious end for a theatre which, in an earlier life, hosted Sarah Bernhardt’s first Chicago stage appearance a century earlier.

The landmark Chicago Building, constructed in 1904-5 and designed by the firm of Holabird & Roche, located to the east of the McVickers Theatre, at the corner of W. Madison Street and S. State Street, still survives and was converted into a dormitory for the School of the Art Institute of Chicago in 1997.

This opened on October 26th, 1922. Its grand opening ad is in the photo section.

The theatre had stage productions in the 60s, I was taken to a wonderful “Fiddler on the Roof.”

It looks like the photo with Fiddler on the marquee is not a stage production from ‘67 but the original Chicago film engagement in '71 or'72 when the film was running roadshow.

January 2, 1926: McVickers Robbery Seen As Inside Job (AP) — Executives of McVickers theatre were scrutinizing rogues gallery files today while police were seeking former employees of the theatre after the treasurer was held up last night and robbed of $1,000. A robber familiar with the theatre’s floor plan and routine sequestered the treasurer, his wife and another employe and forced them to deliver up the contents of the safe. The police are convinced that intimate knowledge of the layout of the building was necessary to smooth execution of the robbery.

I find it interesting that in the above intro no mention
is made of the fact this was of Chicago’s leading houses
that the studios used for roadshow engagements.

I have a question I have yet ti find answer to so hopefully historians of this theater might be able to answer it. in the Spring of 1966 of all the Cinerama theaters in the U.S. why was the McVickers the only one to show Cinerama’s Russian Adventure in the original 3-panel process?

The discussion about the McVickers Theatre has gone on for some time (years!). I think somewhere during the years it’s been mentioned that it was a roadshow theatre, and also hosted several touring musicals in the late 1960s including “Man of LaMancha” with Jose Ferrer. (For a long time I thought it played the Shubert, but thanks to this page I was corrected.) The McVickers was a little unique in that it hosted both roadshow musicals (“Gone With the Wind” in my case in the late 1960s) and touring musicals. Concerning why “Cinerama’s Russian Adventure” was booked at the McVickers in the Cinerama process I do not know. Due to the unique booking, wish I had seen it.

The street, “McVicker Ave.” in Chicago, is named for the original owner of this theatre.