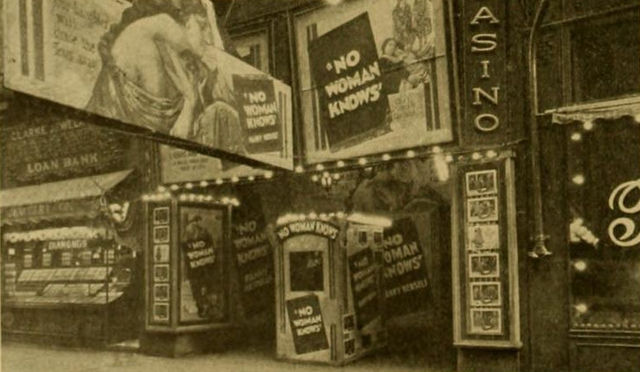 This small, early movie theatre located on West Madison Street at Dearborn Street in the Loop was in operation from 1909 until closing in 1937.

The Casino Theatre was located across the street from the huge Morrison Hotel, which was demolished in the 1960’s and replaced by the First National Bank Building (later known as Bank One Plaza and today Chase Plaza).

Owning a casino & the Cubs?..seems fitting. Great update. Thanks Bryan!

This house was called the Casino Garden Theatre in 1910, when it was one of four houses featured in an article about theaters on Chicago’s Madison Street that was published in the August 20 issue of The Film Index. The article confirms that the Casino was originally owned by Charles Weeghman. It was managed for him by Harry B. Fitzpatrick. The article says that the Casino Garden Theatre had been operating for almost a year, which means it must have opened in the latter third of 1909.

The I cited in my previous comment article also gives the seating capacity of the Casino Garden Theatre as 400.