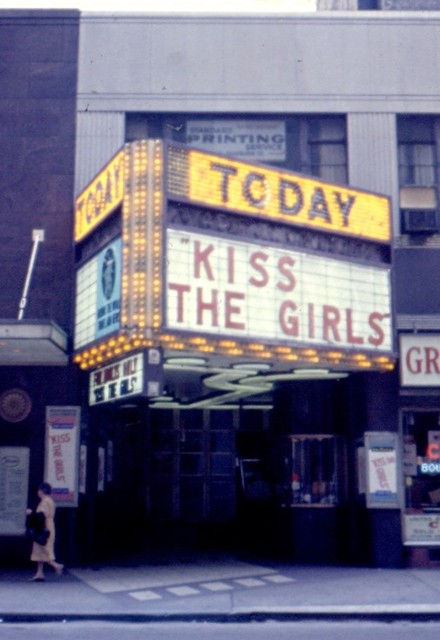 Located on the site of the Pastime Theatre (which has its own page on Cinema Treasures). The 327-seat Today Theater, which opened February 28, 1941 on W. Madison Street near N. Dearborn Street, was the second theater in the Loop that featured a mostly newsreel format. The first Loop theater to do this was the Loop Theater, originally called the Telenews.

During the Today Theater’s last years, it showed adult films. Visitors to the Today Theater often went to the Forum Cafeteria – a two-level Streamline Moderne delight that was next door and was razed in the early-1980’s at the same time as the Today Theater. The site of the theater is now 3 First National Plaza.

In the book “THEN & NOW”-CHICAGO’S LOOP" by Janice A. Knox, there is a nice shot of the Today theatre- circa 1960- on page 69. ONE HOUR PROGRAM LATE NEWS on the marquee. Just west of the theatre is the great Forum Cafeteria, which was wildly popular. On page 94, there is a shot of Madison and Dearborn -circa 1960- looking west.There is another picture (very small) of the Today.

Here is a June 1973 article in the Harrisonburg (VA) Daily News Record:

Some adult movie houses and book stores closed their doors Friday or planned to change their fare in the wake of a U.S. Supreme Court ruling apparently giving police more leeway to get tough with pornography peddlers. “Closed due to uncertainty of court decision. Open when situation more stable,” read a sign on the door of the Adult Movie Arcade in downtown Louisville, Ky.

Don’s Playland a block away decided on a closeout sale. “Due to the most recent ruling by the Supreme Court, we are liquidating all stock â€” 50 per cent off.“ Owner Don Marsh prophesied the ruling would drive pornography back underground. He called the decision a "rape of the Constitution.” Other newsstands and bookstores displayed signs saying closed “for inventory.”

Most pornography peddlers agreed the industry was in trouble and some film houses planned to change their tastes as a result. “The law is the law. We have to abide by what they say,” said Paul Jones, manager of Today, an X-rated theater in Chicago. “We’ll just have to go to something else. We’ll go to the films with less sex and black films.”

Joseph Boardman, advertising manager of the underground newspaper, the Los Angeles Free Press, said he alerted his sales staff that “there’s a good chance we’ll be changing our advertising policy drastically in light of the Supreme Court ruling.” “If they (the police) start hasseling us …we’ll take the nudies out…”

I kind of discovered this theater by chance. They never ran ads in the newspapers.

Around 1969 a friend and I saw a couple of soft-core movies at the TODAY. The posted minimum age was 17 or 18 and my friend, an ex-Navy veteran of 28, could not believe he was carded!

The Today is seen at 3:38 in this Vivian Maier film.

This opened on February 28th, 1941. Its grand opening ad can be found in the photo section.

rivest266, the grand opening ad did not properly load to the photo section.