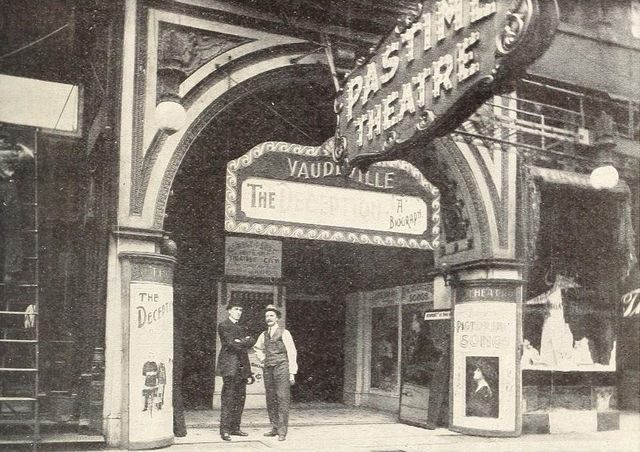 This fairly small Loop theater, which opened around 1908, was situated on W. Madison Street, not far from N. Clark Street, where today’s First National Plaza is located. It presented both vaudeville and movies originally.

Its management caused a bit of a stir when it hired a group of African-American musicians to play jazz music in the lobby for its patrons between shows, not so much because of the musicians' race, but because jazz was not considered refined entertainment by many in those days, so in some respects, the Pastime Theatre’s management was ahead of its time.

The Pastime Theatre was closed by the 1940’s, and has long since been demolished.

Here is the correct link for the above comment

The August 20, 1910, issue of The Film Index published an article about the four theaters then operating on the block of Madison Street between Dearborn and Clark. It said that the Pastime Theatre had been built “about two years ago”, which would make an opening sometime in the latter part of 1908 likely. With 460 seats, the Pastime was the largest of the four theaters on the block.

The Pastime Theatre Co. also operated a house of the same name on Adams Street, as well as the Victoria Theatre in Logan Square. General manager H.W. Thompson had his office in the Madison Street house.