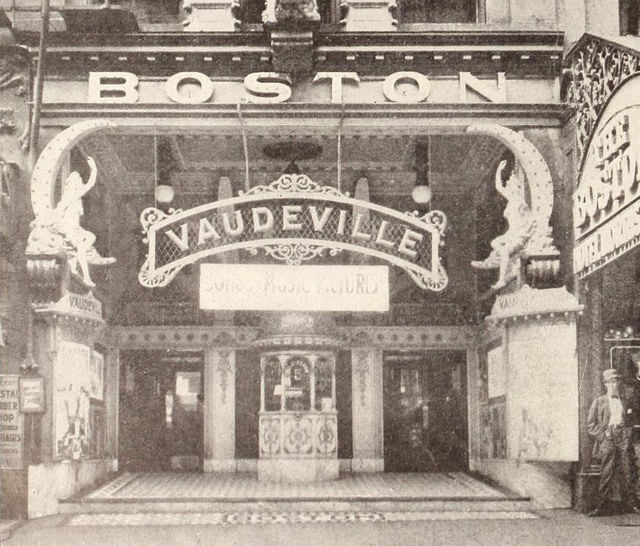 The Boston Theatre opened in 1908, near the corner of W. Madison Street and N. Clark Street, and was one of three early Loop movie houses owned by Harry C. Moir, who was also the owner of the Morrison Hotel, which the Boston Theatre was located near to. The theatre was also located kitty-corner to the large Boston Store, which could explain the theatre’s name. It was located adjacent to the Columbia Burlesque Theatre on W. Madison Street.

In 1925, the Boston Theatre, Rose Theatre and Alcazar Theatre were among several properties demolished to make way for another expansion of the already large Morrison Hotel (with 2,500 rooms by the late-1920’s!)

I’m curious how a theatre in Chicago came to be named after another city. (We’ve never had a Chicago Theatre in Boston, to my knowledge.)

I would guess that the theatre was trying to profit from association with the department store, as the Boston, Rose, and Alcazar were kitty-corner from the Boston Store. Also, Jazz Age Chicago shows an address of 79 W Madison for this theatre.

Wow, what an ornate facade. It didn’t even last 15 years. What a waste.
This is one I never knew about.
Thanks CT.

Moir named this theatre “Boston” because he owned the adjacent “Boston Oyster House” restaurant in the Morrison Hotel. The Boston Oyster House was a landmark restaurant at Clark and Madison from the time of the Civil War until it was demolished with the Morrison in 1964-65. The restaurant’s cuisine was upscale seafood patterned after New England seafood restaurants. Naming the theatre after the restaurant amplified advertising for both. In the 1920s, Moir sacrificed the theatre — which was in a small building constructed right after the Great Chicago Fire, for the new 45-story tower wing of the hotel. Moir was ruined in the Depression, having overleveraged to expand the hotel to the world’s largest. He lost the hotel in the early 1930s. The First National Bank of Chicago acquired the property and demolished it about three decades later.

The Boston Theatre probably opened in early 1908. An article about four theaters then operating on this block of Chicago’s Madison Street, appearing in the August 20, 1910, issue of The Film Index said: “The Boston Theatre was built two and a half years ago by the Boston Theatre Co., at an outlay of $17,000.”