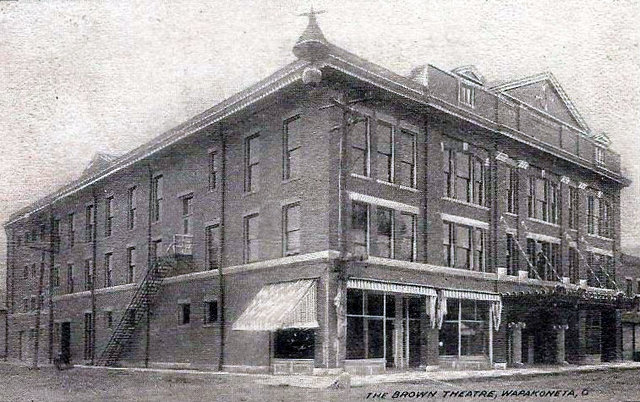 The Brown Theater was opened in 1904. It began screening movies in the 1930’s and was known as the Brown Opera House. By 1941 it had been renamed Wapa Theatre.

WAPAKONETA â€" The classic marquee above the Wapa Theatre is dark but for the lettering where the weekâ€\s showing once appeared. Instead of a movie title, the marquee reads simply: â€œWho needs the Wapa Theatre?â€

To owner Robert Wiesenmayer the answer is obvious: nobody.

â€œItâ€\s been closed about three weeks and nobody really knew it. I thought somebody would notice but not one person said a thing to me about it. That tells you about all you need to know,â€ Wiesenmayer said.

The century-old theater, which began life as a vaudeville house in 1904, housed its last film â€" Dragon Wars â€" about three weeks ago. The space has been a movie theater since the 1930s, but itâ€\s been a few years since itâ€\s made money.

Wiesenmayer has owned the Wapa for nearly two decades, but in recent years the business has declined. First he lost the older children and adults, customers who either drove to Limaâ€\s big, 12-screen multiplex or stayed home and watched movies on DVD. He shifted to children-friendly flicks and kept the prices low to draw the 10- to 16-year-old set. But pretty soon they stopped coming too. By the end, the theater was drawing 100 customers a week on a good week.

â€œOn weekends youâ€\d be lucky to have 20 on a Friday. On Saturday night you might get 50 and another 20 on Sunday. When fall sports started it got worse. You have a home game on Friday night it was like youâ€\d quarantined it,â€ Wiesenmayer said.

Wiesenmayer said he has no plans for the building, but hopes somebody will think of a new use for it. Until then heâ€\ll keep the building up and consider any suggestions.

â€œIâ€\ve got to find if thereâ€\s another adult use for the theater. Iâ€\m not ready to tear it up and Iâ€\m not going to put plywood up over the windows or anything, I just need an alternative use for a historical location, Wiesenmayer said.

â€œIt was sad to see it closed, but I would have to start taking a collection up to keep it going.â€

Lost Memory- no, but then many links break and the stuff is lost. I haven’t heard of a newspaper making a fuss….

I have also seen theater websites often scan articles & post them right on the site. For that matter, all the scanned newspaper stuff….

Before we get into trouble, I will add that I wouldn’t post a full article on the homepage where it is very visible and looks like news. There, a summary is better. And, if you have zillions of articles like you do with photos, perhaps better to summarize and/or link all but the most important ones. That’s my opinion. Of course, I don’t make decisions for the site.

Yes — please refrain from posting the full text of any copyrighted article. Cinema Treasures respects the rights of copyright holders and does not single anyone out in prohibiting the duplication of complete articles and other copyrighted works on this site. Lost, you mentioned that “I thought that we couldn’t post the full text from an article. Has that policy changed?” The short answer is indeed no.

While we understand the desire to preserve these texts because of the expiration and instability of links, the benefit of posting an article does not outweigh the legal and logistical issues this practice may cause.

Thank you all for your understanding.

A postcard with an early view of the theater is for sale on eBay:
http://tinyurl.com/38k5r8

I caught a quick glimpse of the Wapa’s classic Americana exterior in an establishing shot in a show on the Oxygen Network called “Snapped”.
So I just had to see if there was a link on Cinema Treasures. CT’s never let me down.
The Wapa Theatre is apparently located in the hometown of the mom/murder suspect whose story was profiled.

I am pleased to read on CT that the Wapa is currently making another go at remaining open. It’s good to read that even during it’s closure that the owner would “keep the building up and open to suggestions”. A far cry from the too many of which we read about, that just fall into complete disrepair after closure and ultimately are destroyed. Since the Wapa is so clearly incorporated into a building of that size, I’m sure it will be maintained properly as it searches for it’s footing once again.

I’m curious if the interior appears as original as the exterior does. Given the classic vibe the still pictures have. Wonder if they’ve tried the arthouse double bills of classic older films as of yet. Or tried to tie in any theatre anniversary promotions.
To remind local folks that it’s still there through special events advertising, etc.

I wish the Wapa many years of continued, consistent success.
Now if I could just figure out why I was ever watching Oxygen in the first place.

They’re showing first run movies, so the function should be changed accordingly.

It would be nice if someone could write up the history for this theater. Some of these really old listings have no information at all. I saw a movie here in 2015, and the marquee is pretty fantastic at night. The auditorium is actually very broad and shallow. I think the balcony was closed at that point.

The 1946 Sanborn (an update of the 1924 map) still shows this as Brown’s Theatre, and the marquee is shown as an old-fashioned rectangular awning. Not sure when the neon went up, or when the name changes happened.