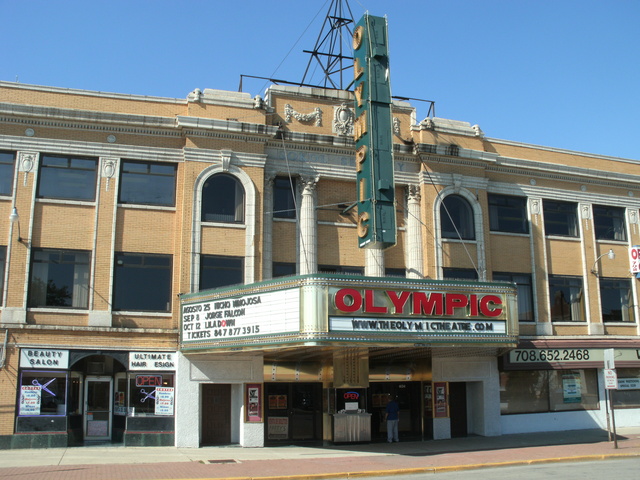 The Olympic Theatre is a moderate-sized theater housed within a larger building. The facade is in an understated Neo-Classical style and the interior is reminiscent of French Renaissance. It opened in 1927, originally as a ballroom. On November 19, 1937 it was converted into a movie house playing Alice Faye in “You Can’t Have Everything” & Pat O'Brien in “San Quentin”. It remained as a movie theatre until closing in 1993, after falling in disrepair.

The Olympic Theatre briefly reopened in 1994 as a venue for a live theatre production, but closed again in less than a year, sitting vacant for a handful of years.

For a couple years in the early-2000’s, the theater was renamed the Concordia Theatre and hosted mainly acts catering to the Latino community.

Now under new management, the theater has returned to its original name, the Olympic Theater, and reopened on March 8, 2008. The theater now hosts concerts, comedy shows, pageants, plays and other live entertainment. The Olympic Theater has undergone renovations including state of the art audio and visual components.

The heyday of the Olympic Theatre in Cicero was so long ago that “Gone With the Wind” was a new release.

But after years of being dark, the 3,000 light bulbs in the old marquee are shining brightly once again. The theater, in an 81-year-old building on 6134 W. Cermak Rd., reopened Saturday with both Las Vegas-type flair — dancers and a comedy act — and a twist of local fare — a ribbon-cutting ceremony and a mariachi band.

Albert Pontrelli, a former owner whose sons now own the building, said the Cicero landmark will appeal to theater lovers and blue-collar workers alike.

“Early theaters were designed so the average working man or woman felt like they were in a palace,” said the 72-year-old. “Visitors should still get that feeling today when they walk into a theater.”

The grand reopening brought back some childhood memories for John Kroll, 56, of Clarendon Hills, who recalls visiting the old movie house with his father to watch John Wayne films.

“It’s beautiful, just like I remembered,” said Kroll, among hundreds on Saturday admiring the theater’s domed ceiling and gold leaf designs on the walls. “This place is an architectural treasure with so much history and nostalgia.”

Albert and Joann Pontrelli of Oak Brook bought the building more than 25 years ago, and since then several groups have unsuccessfully tried to run a theater there. Most recently, it was known as the Concordia and hosted mostly Latino-oriented shows.

It closed in 2005 and sat vacant for a couple of years before the Pontrellis' sons, Jim and Ralph, decided to give it another try. They bought the theater from their parents eight months ago and will use it exclusively for live performances.

The first thing the brothers did was to return the original name. Ralph Pontrelli, who owns an advertising company in Cicero, restored the outdoor marquee, which included installing 3,000 light bulbs for the sign. Although it took several months, “it was nice to see the Olympic sign light up again,” said the Lemont resident, 39.

Jim Pontrelli, 31, of La Grange, an attorney with the Cook County state’s attorney’s office, encouraged the grand opening audience to walk around and compare the theater with a 1930s photo printed in the evening’s program. “It looks almost identical,” he said.

The brothers said the marble-facade Olympic building opened in 1927 as a Czech athletic club and housed a gym, swimming pool and large ballroom.

In 1939, the ballroom was converted into a movie theater, showing silver screen hits like “Gone With the Wind” and “Casablanca” over the years.

In 1994, a theater company rented the building for a play, which lasted eight months.

Then the theater sat vacant for several more years.

Over the past decade, the owners began to restore the French renaissance design, repairing the walls with plaster and painting with the original colors. The brothers say they aren’t finished. They plan to do more work on the theater’s domed ceiling and a mural above the stage area.

Ralph Pontrelli said he believes the theater has the potential to draw visitors because of its convenient location and a renewed interest in historic theaters.

“Many towns wish they had an old theater now,” he said. “I think this will be great for Cicero and the area.”

The brothers said the theater will continue to have shows that cater to the large Hispanic community. Beyond that, they hope to attract a diverse lineup of live shows.

Riverside resident Joseph Falbo, who attended the reopening, said old theaters like the Olympic should be preserved.

“This is great for the young people,” said Falbo, 75. “They don’t make beautiful theaters like this anymore.”

Here is another photo:
http://tinyurl.com/ydf48hy

As stated on my other posts I am so glad I found this site!!! I have enjoyed reading all and I mean all the post about several of the theaters that I have looked up.

I grew up in the area near the Olympic theater in the 80â€™s and 90â€™s and I cant tell you how many 2nd showings of movies I saw here too many to count. I know I saw Predator there for sure. I remember the place being hot the AC there wasnâ€™t the best compared to the other big name theaters in the area. I remember going to this theater once with my friend and his dad and for what ever reason he made us sit under the balcony for the movie and it was annoying because there was a small light hanging from the ceiling under the balcony that never went offâ€¦ who can get into a movie when there is light on in the theater.
In the mid 90â€™s the Olympic stopped showing movies and was turned into a venue for live performances. I remember one of my teachers at the high school being very excited for this to happen as she remembered the theater form its heyday and was glad that the wrecking ball didnâ€™t find its way there.
The first performance to happen there was called the Metropolis. As part of the high school theater department we got to take a tour of the Olympic it was amazing what the then owner and his crew did to the place. They cleaned everything from top to bottom as best they could with the budget they had. There was a lot of fresh paint and the ceiling had started to be cleaned and restored along with the mural around the proscenium. Kind of state of the art for the time but the orchestra was housed in one of the dressing rooms and there was a video monitor at the foot of the stage that the cast would use to see the conductor give musical direction. The lighting system was very rock and roll looking. It was flown above the house seats and the spotlight operator would climb a wire rope ladder shortly before doors opened to the top of the lighting truss and operate from there. Again a budget thing the director/owner was doing a lot with little. The PA (or sound system) was installed by my old boss and it was very rock n roll stacks and racks were on the deck (stage) and dressed with some fabric but not as you would expect for a theater. As part of the class trip we took we got to search a storage room in the lower level where a few dozen beautiful canvas backdrops were stored. We sorted through them for â€œkeepersâ€ for the high school production of Bye Bye Birdie. Man that was a great time
The actual production of Metropolis was great a real high caliber performance.
I heard the financial issues caused the operation to fold and a judge but a lockout on the place which I guessed caused my old boss to lose his audio gearâ€¦ but what ever like say its what I heard.
I am glad to see the Olympic is open again for live performance. Whish I would have had the capital to make it happen years ago. As dumb as it sounds the Olympic has one thing in its favor parking not lot of its own per say but a lot on the street and in the old â€œLâ€ strip.

Does anyone recall Laura Branigan doing a show there back in the 80s?

I recall going to see E.T. back in the 80s and being allowed to go in on my own and I was a preteen.

Back in the 70s my dad took me to see Live and let die and they wouldnt allow me in.

“LIVE AND LET DIE” was PG can’t understand why they would not let you see it.

From the 1980s a close up of the Olympic Theatre sign in Cicero.

My mom was a pretty happening woman, culture-wise, during the two years we lived in Chicago in the ‘60s. On the Monday morning of our spring break away from school in 1968, she said she had a surprise for us: the matinee of a movie that had just opened at the Olympic Theatre in Cicero called 2001: A Space Odyssey. We filed into the car for the short hop over from Oak Park, and she let us off at the curb before going off shopping. I’m talking about me and six brothers, all of whom were under 18; I’m surprised the theater management let our little ensemble in. Once inside, though, we found that the grand hall was deserted, so where did we decide to sit? In the balcony, of course! The viewing of cinematic masterpiece at the Olympic remains one of the greatest experiences of my life. The film was so crisp looking and the sound was pretty glorious for the time. Seeing 2001 at the Olympic, I feel, established it as my favorite movie of all time. I’ve viewed it many times since, including a remastered 70-millimeter print at the Cinerama Dome in Hollywood, Calif back in 1995. All pale in comparison to my remembrances of being at the Olympic on that one Monday in April 1968. I tell my wife that I’m overdue for a visit back to Chicago, with or without her. When I go, I’ll definitely swing by the Olympic. As for my memories, if only there was some time machine I could step into…

Beautiful building.It’s nice to see this building is still being kept up. I grew up in Cicero and I can remember mom attending beauty school in the building next to the theater. Back then it was safe to leave the kids in the car and we knew once mom went inside we were free to roam the area and that we did playing hide and seek crossing the street to go to the bank and get free candy. All the fun we had and we managed to get back into the car before mom got out of class. It was a treat for us to go see a movie here Never by ourselves it was always a family event.