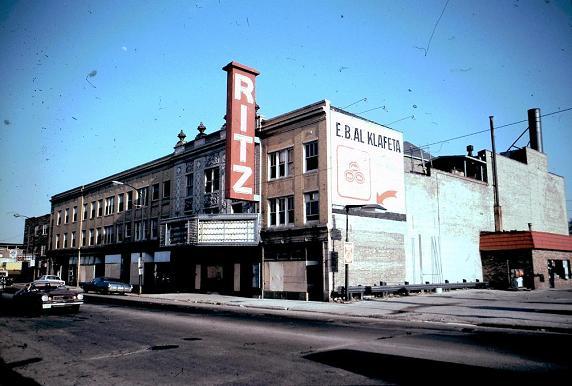 The Ritz Theatre opened in 1926 and was closed in 1978. In 1986, the Ritz Theatre was demolished, apart from the facade. An apartment building Atrium Court was built on the site many years ago.

There sure was a fire there in the late 70’s.My grandfater was a retired Berwyn firefighter,so my dad knew the lieutenant in charge.We lived a block away at 1222 highland ave.,and went over there when we heard the fire engines.It was a small fire confined to a closet across from the candy counter.The guy my dad knew took us inside.Over the next few years I had a number of chances to go inside. It was closed,and the electic and water were turned off.I can picture the entire building.It was almost an entire block long.The sub-basement regularly fodded and had to be pumped out.Once the electric was off the sump pumps were obviously not working.Wish I had kept some of the items that were no doubt discarded,like the vaudeville trunk with orange clown shoes in it along with other costumes.

Kevincon, please email me directly for my postal address
email me at And thank you so much in advance. :)

Someone somewhere must have pictures of the interior of The Ritz! The Theatre Historical Society has nothing at all. :(

My grandma might have some pictures of the Ritz.I’m going to look through some of the boxes of pictures.My family owned a house less than a block away from the Ritz from 1926 to 1992.I could see the Ritz from home at 1222 Highland ave.

Thanks josephdkovarik :)
It would help a lot.

Does anyone remember that a kid was accidently shot by his brother in the theater in the 60’s? I was there and heard the shot go off. It sounded so loud in there. Some boys broke into a home and stole some guns and hid in the theater. One boy was sitting behind his brother and the gun went off, and the bullet went thruogh the seat into his brothers back. Does anyone have knowledge or information about this?

josephdkovarik, I’m very interested in seeing pictures of the Ritz Theater. You can e-mail me at

My grandparents used to live only a couple blocks north of the intersection of Ridgeland/Roosevelt. I remember going to the Ritz as a kid. I recall they used to have closed circuit Black Hawk games shown there when they were in the Stanley Cup Playoffs in 1971.

Around 1975 I was with some friends who knew the projector operator, we had to climb over the chain link fence at the top of the building to get access to the theater. This was right next to the gas station and a straight fall to the parking lot if we missed, pretty stupid.

In 1977 I got a part time job there, I was only in 8th grade which goes to show how the theater was being run. The place was pretty run down, but they were making some minor improvements. They painted the walls a dark yellow and I remember a guy using a rolling stencil dipped in red paint that looked like a fleur de lis. He rolled it up and down the walls to create the pattern. They used to lock up the soda cups so the employees wouldn’t help themselves to the it but they didn’t lock up the popcorn tubs so we just used those instead! The manager was an older guy who looked like he was on his last leg, he didn’t want to be bothered after the last show started and said to let anyone who showed up after that in for free. We would charge them a couple of bucks and keep it for ourselves, hey we were young teens. I wasn’t there for a fire or the closing, just some good memories and now I wish I had some photos to share.

This item from the March 14, 1925 issue of The Moving Picture World gives the address of the theater underway in Berwyn as 6330-44 Roosevelt Road, but I’m guessing that either that was a mistake or that the odd and even numbers were later switched from one side of the street to the other, as the project description otherwise fits the Ritz quite well, and the timingis right. One other oddity is that the projected name of the new house was the Oakwyn, a name that was later used for a different Berwyn house.

“Work has started on a $500,000 theatre block in Berwyn at 6330-44 Roosevelt road, between Cuyler and Ridgeland, just across the boundary line from Oak Park. It will be called the Oakwyn and will have a 2,250-seat movie with complete stage. There will also be six stores and eleven apartments. Hooper & Janusch are the architects. James I. Biba and John J. Lynch, who took title to the 161x125 site, will operate the Oakwyn.

William T. Hooper and Fred W. Janusch were the principals of the fairly well-known firm of Hooper & Janusch. Though best known for several high rise apartment blocks, the firm designed at least three other theaters, but as far as I’ve been able to determine, of those three only the Manor Theatre in Chicago was actually completed.