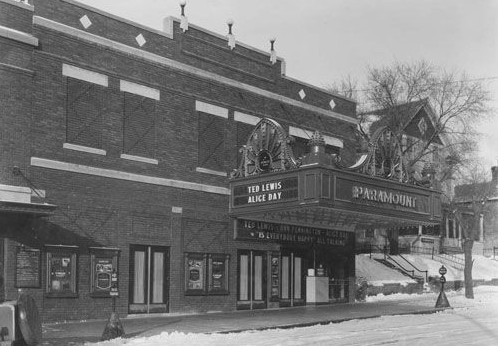 Originally opened as the Eltinge Theatre on February 9, 1920 with “The Miracle Man”. It was operated by the Finkelstein & Ruben chain. They were taken over by Publix in 1929. It was remodeled to the plans of architectural firm Liebenberg & Kaplan and became the Paramount Theatre on October 4, 1929, just three weeks before the stock market crash that precipitated the Great Depression. It was later renamed State Theatre. It was listed as (Closed) in 1943.

The Paramount was located in the 200 block of 3rd Street.

Chuck, can you find any listings from the 1930s or later for either a State Theatre or a Capitol Theatre in Bismarck? Those two and the Bismarck are the only theaters in the town that are mentioned in Boxoffice during the 1930s and 1940s.

I’m wondering if the State might have been the Paramount renamed (the Capitol was an older theater on Main Avenue and had only 300 seats.) After being mentioned three times in Movie Age in 1929, the Paramount vanishes, and the only explanation I can think of for a house built for a major chain vanishing from the magazine without a trace is that the name was changed. Had it been destroyed in some disaster I’m sure the magazine would have mentioned it.

I also came across two references to an Eltinge Theatre in Bismarck. It was having Gennett talking picture equipment installed according to Movie Age of June 8, 1929. A second reference to the Eltinge appeared in Boxoffice of October 28, 1950. I find this gap puzzling. The Eltinge then vanishes too.

Another mystery is a single-line item in Boxoffice of September 24, 1949, datelined Bismarck, N.D., saying “The new Krieger Theatre has been opened here by Frederic and Albert Krieger.” Neither the theater nor the Kriegers ever get mentioned again.

By 1954, Boxoffice is making reference to the Bismarck and the Dakota as the town’s only indoor theaters, though a 1956 item said that the Capitol was being reopened following extensive remodeling. There’s never a hint of what became of the State or the mysterious Eltinge or Krieger theaters.

Thanks. Somehow I missed the Dakota Stage Playhouse page.

Whet the help of the name Gackle I found one more Boxoffice item mentioning the Krieger Theatre, in 1964 when Albert Krieger joined a regional association of theater operators. Boxoffice must have misplaced the theater in the earlier item.

This theatre was the Eltinge Theatre prior to the Paramount name.

This opened as Eltinge on February 9th, 1920 and reopened as Paramount on October 4th, 1929. Both grand opening ads in the photo section.