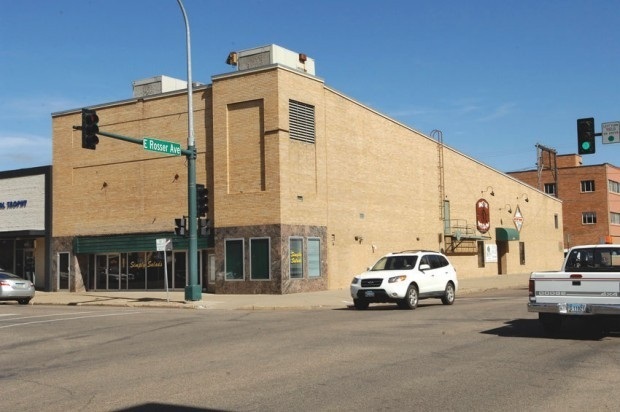 Located on the corner of N. 4th Street and E. Rosser Avenue opened as a single screen with around 900 seats in 1951. It was was converted to a twin on January 22, 1976 and after reseating it seated 821. The building was large and all four exterior walls were of a light colored brick. The side of the theatre ran the entire block of E Rosser Avenue.

Since closing, the large marquee and upright sign have been removed and a awning put over the old entrance of the theatre. The lobby was converted to a restaurant. The auditoriums were blocked off and sat empty. It was demolished in February 2011.

The Dakota Theatre opened October 12, 1951, according to Boxoffice of October 27. The original operator was Northwest Theatres, Inc.

You know that’s the knd of twin theatre a old theatre guy like me would love to have,However,Winter in that state is another thing. beautiful theatre. I bet the Single screen was great. Everyone just had to TWIN,TWIN, and TWIN in the 70’s.

At least they were built a twins and not hack jobs of old movie palaces like my beloved LOEWS people did.You got to do what you got to do though.Did you see where the LOEWS KINGS is being redone to reopen in 2014,it was never cut up into smaller houses thank goodness.

Yeah, they hacked up my NATIONAL HILLS to a triple,the projectionist had to shoot on film out of the popcorn room.COLUMBIA 1 and 2 were first a triple, then they went to COLUMBIA 2 and then we had a quad. I guess it is a businees first,but they never should have touched NATIONAL HILLS. Robin,told me on the Imperial site she kept the ticket number of the last ticket sold! wow!

Yeah I saw that,Robins alright in my book.I would have never thought of that.

According to this article, this theater will probably soon be demolished: View link

Just passed by the block where this theater was and it is totally gone, demolished, which means soon construction will begin on the new three floor office tower that is replacing it. A loss of Bismarck history.