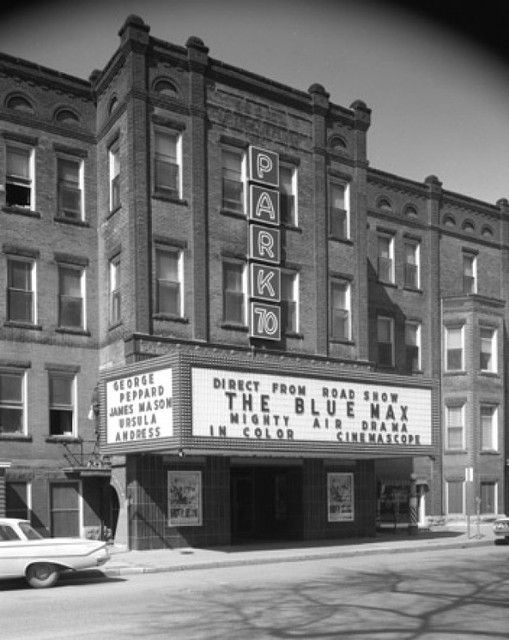 The Cecil Theatre opened June 3, 1912 with seating listed at 859. This was the larger of the seven theatres that were located in the downtown section of Mason City. The theatre was adjacent to the Eadmar Hotel, and was owned by the Cerro Gordo Hotel Company in the 1980’s. Prior to that time Central States Theatres operated the theatre.

70mm Todd-AO projection was installed on August 10, 1966 and it reopened as the Park 70 Theatre on October 27, 1966. In its later years it operated as an adult theatre. The theatre was abandoned for some time before it collapsed in 1988.

The April 16, 1955, issue of Boxoffice Magazine published the obituary of Tom Arthur. Mr. Arthur arrived in Mason City in 1904 and took over management oft he Wilson Theatre. After the house burned in 1911 and the Cecil was built on its site, he continued to manage the new theater until his death.

I worked at the Cecil Theater from 1957 to 1959 as a ticket taker, floor mopper, supervisor of the theater for inappropriate behavior (wielding my trusty flashlight), and updater of movie posters and the front marquee. My uniform was a maroon jacket, white shirt, bow tie and black slacks.
It was an interesting place to work. Ben Hur was the last stage production and the set was still backstage behind the movie screen, including the treadmill the horses ran on. The old dressing rooms with the star on the door were also there. There were box seats which were no longer used, and three balconies (the top one closed for safety).
I don’t remember the manager’s name (Harvey, I think), but he lived on my old paper route, I believe on 3rd St. S.W. Mrs. Arthur took over as owner after her husband passed away in 1955. I remember her as a grouchy, finicky old lady who lived upstairs and was a Hollywood celebrity wanna-be type. There were many times when she would dress to the 9’s, complete with diamond jewelry and mink stole for the local upper-crust festivities. On such occasions, she would often have me drive her brand new white Cadillac from its parking spot behind the theater around to the front. Her final directive was always “And don’t hit the curb with my white sidewalls!” I only did once that I can remember.
I seem to remember starting at 35 cents an hour and worked my way all the way up to 45 cents by the time I left for a better job at the Piggly Wiggly grocery store on 12th street. They paid 75 cents an hour.

Beautiful old hotel and theatre in the post card picture. Must have been Mason City finest.

Liebenberg & Kaplan were the architects for the 1936 remodeling of the Cecil Theatre that kencmcintyre referred to in his comment on March 11, 2009.

Another major remodeling took place in 1953, when the open windows between the foyer and the auditorium were closed in, and the lobby, foyer, stairs, lounges, rest rooms, and office were all given a modern makeover. According to articles in the Mason City Globe-Gazette, the auditorium had been restored and repainted, but that in style and configuration it was still substantially as it had been when the house opened in 1912. Even the boxes were still intact.

The 1953 renovations coincided with Mason City’s centennial, and with the fiftieth anniversary of manager Thomas Arthur’s arrival in town to take over management of the Cecil’s predecessor, the Wilson Theatre.

To answer Ret. AKC (NAC) CCC Bob Jensen’s question from January 20, 2007, about which theater held the world premiere of “The Music Man”…. the answer is: the Palace.

The June 19th, 1962, one-off event was actually a world premiere and press preview. The film didn’t actually open an engagement in Mason City until a month later on July 18th where it played day-and-date at the Palace and the Lake in nearby Clear Lake. 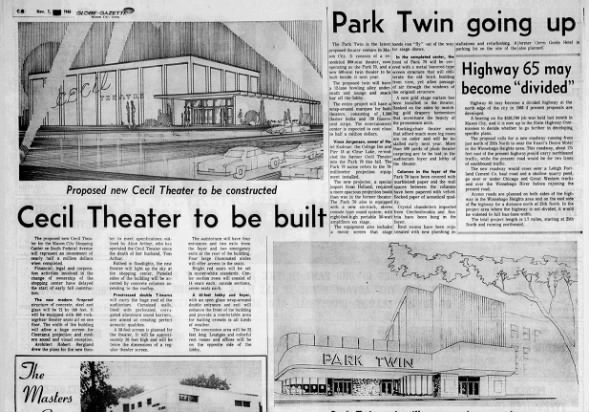 Originally the Wilson Hotel and theater, built in the late 1800s, Then the Cecil Theater and the Eadmar Hotel (named after the owners daughters Edith and Margaret Rule).