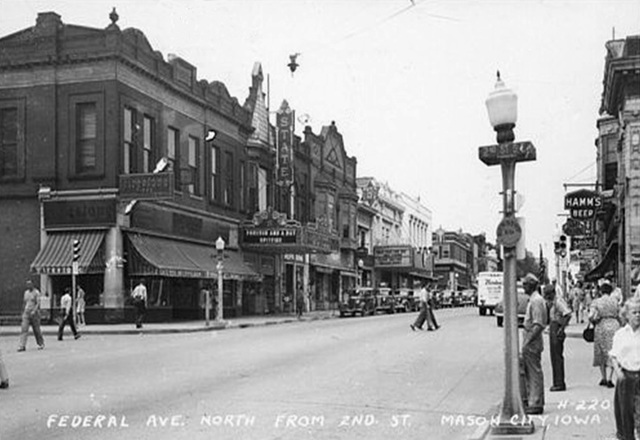 The State Theatre opened in the early-1940’s and was operated by Central States Theatres. Seating was listed at 532. One of the seven movie theatres located in downtown Mason City. The State Theatre was re-named Bandbox Theatre on July 27, 1951 and was closed around 1956.

Oops! I just read this theatre closed in the late 50s. Sorry.

A photo of the recently updated auditorium of the State Theatre was published in Boxoffice Magazine, June 26, 1937.

I can’t be sure yet, but it’s possible that the Star was the opening name of the State, and that was renamed in the 1930s. The 1937 photo of the State shows a narrow, single-aisle auditorium with a high ceiling, such as might have been built in the early days of movie houses. I’ll do more digging and see if I can find anything else.

Now I’ve come across an item in the “From the Boxoffice Files: Twenty Years Ago” column in the magazine’s November 13, 1948, issue. It says: “The Star Theatre at Mason City is being remodeled and will open under the name of the Iowa as a first run location. M.R. Tournier is manager.”

Their dating must have been at least a few months off, as the September 28, 1929, issue of Movie Age said that the Iowa Theatre at Mason City had been sold by W.E. Millington and Mrs. Maynard Tournier.

I still haven’t been able to discover if the Star/Iowa did later become the State, but I’ve found more items confirming that the State became the Band Box Theatre in 1951, and was still operating under that name as late as 1955, when CinemaScope was installed.

Here is a May 1950 article from the Mason City Globe:

C.A. Schultz, former president and co-founder of the Commonwealth theater circuit of Kansas City, has purchased the State theater from Nathan Miller and has signed a long term lease with N. Levinson, owner of the building. Mr. Schultz, who already has other business interests in Mason City and Albert Lea, in the Gretchen Sweet shops which he owns and operates, has had a long career in motion picture theater operation. He withdrew from Commonwealth a year ago to recover his health and now plans to concentrate on a number of carefully chosen theaters to which he can give his personal attention.

The State theater will be closed soon for remodeling and econditioning. The latest ideas in modern theater construction will be used. Plans include the rebuilding of the marquee, with the new spotlight illumination, covering of the lower part of the building with structural glass, the building of a hew box office, and the installation of display cases. The lobby will be enlarged, and an 11 foot snack bar will be installed. New carpet, artistic pastel wall decorations, new drapes and many mirrors will give the lobby a luxurious note.

A grand staircase will lead from the lobby to a lower floor lounge, with completely new rest rooms, where smoking will be permitted. The manager’s office also will be located on the lower floor. New Manager Glenn Beckett, who comes to Mason City from the deluxe Uptown theater in Kansas City, and who has also managed the Ritz in Chillicothe, and the Home theater in Kansas City, will be the resident manager.

The State theater will adhere to a policy of entertainment designed for the entire family. The snack bar will have a bottle warmer for the convenience of mothers attending the theater with small babies. In his housewarming plans, Mr. Beckett will include an opportunity to get a preview of this beautiful little theater before it is re-opened for business.

The Band Box theater, formerly the State, opens Tuesday under a new name and advertised with the picture of a clown, which is to represent the “center of attraction.” There is a new look about the Band Box theater, new seats, new air-conditioning, new screen, new sign, new carpet, new projection and sound, modern concession bar and new front.

Two separate companies united through the general manager of each, R.P. Carmean, announced the appointment of two men as new additions to their executive personnel. Robert G. Budlong, 28, manager of Gretchen’s Sweets Candy shop, has served his apprenticeship acting as assistant manager in this store for more than a year. He is from Albert Lea, Minn., but has bought a. home at 1134 First S.E. His family consists of his wife, Leone, who also is employed by Gretchen’s Sweets, and his mother.

Harry Miller, 29, is the new manager of the Band Box theater. He has long been known around Mason City in the field of show business. He worked as house manager for more than two years n the old State theater here, and has been in show business for 10 years.

That’s what Joe said a few months ago. I’m looking at some ads now that seem to end in December 1956, but nothing at that time about the theater closing.

The Band Box is last advertised in the Mason City newspapers on December 11, 1956. It either closed or changed its name again, which would be why Band Box no longer shows up in the search.

The finding aid to the Liebenberg & Kaplan papers lists a State Theatre in Mason City as one of the firm’s projects from 1950.

Why was this theatre closed?

The Bandbox theatre opened on July 27th, 1951. It is an seperate theatre from the State. 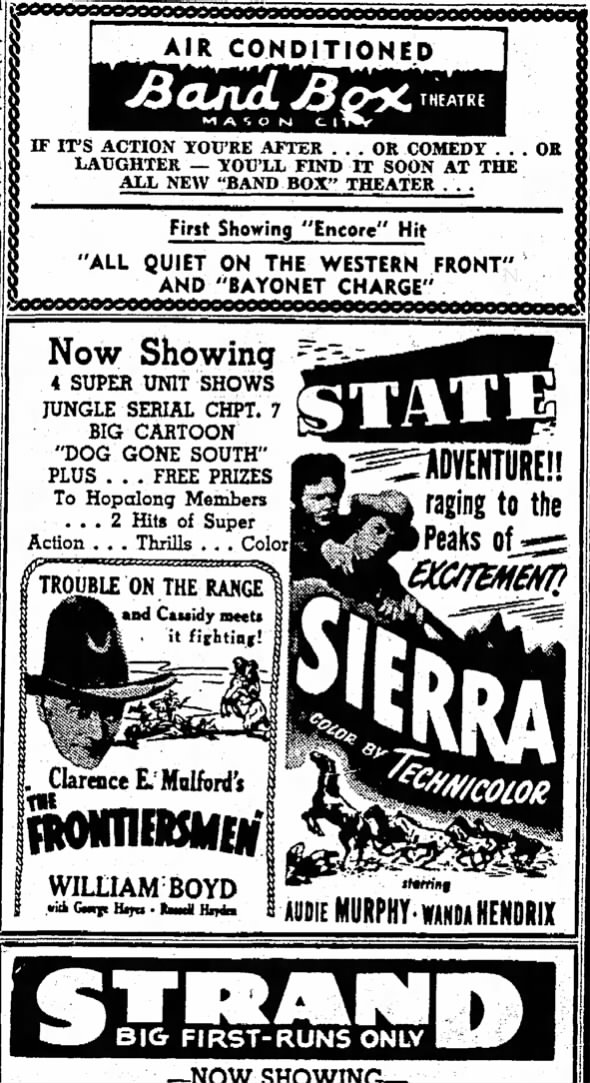