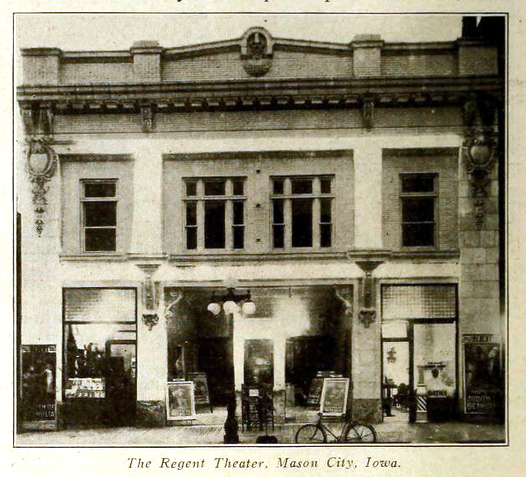 Originally opened as the Regent Theatre, it was renamed Palace Theatre in the early-1920’s and was later owned and operated by A.H. Blank, a subsidiary of Paramount Pictures Inc. Seating was listed at 786.

This was one of seven theatres located in downtown Mason City. Central States Theatres took over ownership in the early-1930’s until the theatre closed in the mid-1980’s.

The obituary of John McKee Heffner was published in the April 7, 1956, issue of Boxoffice Magazine. In 1906 Mr. Heffner had opened the first movie theater in Mason City, the Bijou, on South Federal Avenue. After the Bijou closed, he became the manager of the Palace, which had originally been called the Regent Theatre.

Here is a December 1956 ad from the Mason City Globe:
http://tinyurl.com/lnrjn5