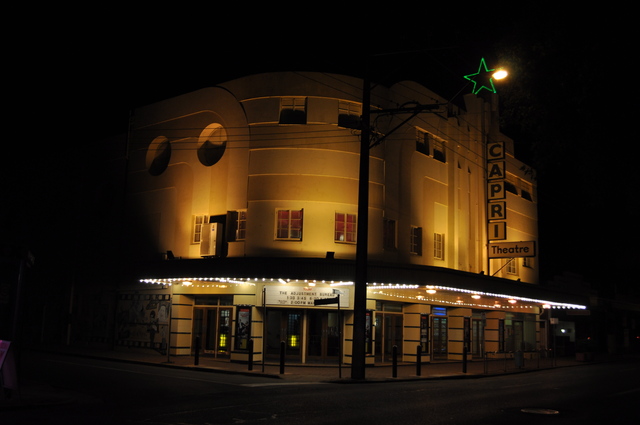 Replacing the 1920-built Star Theatre, which still stands almost adjacent. This originally opened as the New Star Theatre on 8th October 1941 with a seating capacity of 1,472. It was the last cinema to be built for the Clifford Theatres/Star Theatres circuit. Opening films were Robert Young in “Florian” and Lew Ayres in “Dr. Kildare Goes Home”. It was accquired by the Greater Union Cinema circuit in 1947. It was re-named the New Curzon Cinema on 21st February 1964.

After a refurbishment, it was re-named Cinema Capri on 16th November 1967, when the seating capacity was reduced to 851. The Cinema Capri was purchased in December 1978, by the Theatre Organ Society of Australia (South Australian Division) Inc., and was re-named Capri Theatre It was purchased to house their 4Manual/13Ranks Wurlitzer, which after installation had its inaugral concert on 2nd April 1983.

The 4Manual/29Ranks Wurlitzer organ is housed in glass fronted organ chambers, and is used Tuesdays, Fridays, and Saturdays at evening film performances, as well as for regular organ concerts, featuring local and international organists.

The Capri Theatre was added to the Register of State Heritage buildings on 30th August 1990.

Is that a fieplace(in the foyer?)?