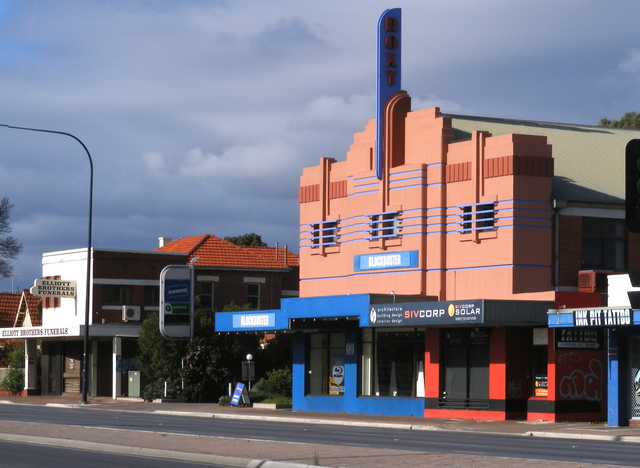 Designed with the latest ideas in cinema construction, the Roxy Theatre in the Adelaide suburb of Everard Park, was built at a cost of Â£10,000 ($AUD20,000) with a seating capacity of just over 1,000. The theatre opened on Wednesday October 7, 1937 with MGM’s “Piccadilly Jim” starring Robert Montgomery. The Roxy Theatre had two sets of curtains, the front being gold and hand-cranked from the projection box, and a motorised set of lettuce-green in front of the screen. As one account of the era noted ‘The interior had a gay color scheme harmonising in a tasteful way. Concealed lights in the walls, of an unusual design, were supplemented by Philinea architectural lighting equipment’. The facade was in Art Deco style, severely straight, gaining from its long flowing lines and gracefully curved ornamental ironwork. In the centre of the facade was the ‘Roxy’ name neon-tower light, the first sky sign to be erected without the use of the customary cumbersome supports.

When TV arrived in Adelaide in 1959, the Roxy Theatre became another casualty and closed on Saturday November 25, 1961. A few months later it was operating as a supermarket, with the name of the grocer covering the Roxy tower. A false ceiling was fitted above the former stalls, blocking off the stage and the dress circle. On October 17, 1985 the imposing Art Deco style theatre was gutted by fire. At the time it was being used as a carpet showroom. In 1987 the heritage listed Art Deco style facade was restored, and a new Roxy sign was erected. It was the name of a new business in the building; ‘Roxy Video’. In 1990, it changed its name to Movieland and is still operating there in 2011 as a Blockbuster store, which closed in early-2014. By 2018 it was operating as a dance studio and real estate agency.

The ROXY was built by my father-in-law David Harris and his older brother Don Harris. David was 27 years old at the time the theatre opened in 1937. Both David and Don are deceased but David’s wife Joy still lives in Adelaide. I have asked my wife Marilyn who the architect was who designed the theatre but she does not know. I will attempt to find out.

I favourited this page as Don Harris was my father. I have a copy of a full page advertisement when it opened, listing all the people who were part of the construction and fit-out. It is wonderful to see this on the internet as my father died in 1956, but he would have been so proud that the façade has been heritage listed. Virginia Thomson, December 7, 2015.

Building is now a dance school(Zumba with Christine), and a real estate acency(One Direction Real Estate).