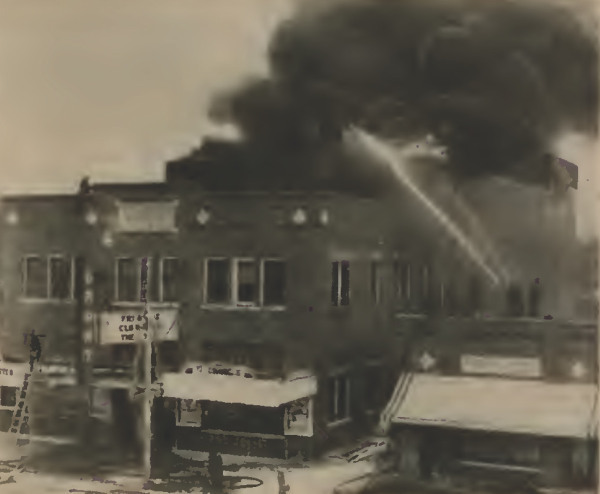 The Eldon Theatre was opened on September 22, 1920. On December 4, 1924 it was renamed Grant Theatre. By 1961, the Grant Theatre was struggling to stay open and was being staffed by a group of teenage volunteers. On December 26, 1962 it was badly damaged by fire. It never reopened and another fire in the vacant building in 1965 sealed its fate. A drive-up to the Pinnacle Bank is there now.

Opened on September 22, 1920, the $100,000 theatre launched with “The River’s End” supported by music by the Morrison Orchestra of Denver. M.L. Klinck also provided a coronet solo. Technically, on opening night it was known as the Klinck Theatre. However, Mr. and Mrs. Elgin C. Klinck announced that from that day forward it would be known as the Eldon Theatre in memory of their late son, Eldon. They vowed to keep the name of the Eldon as long as they owned the venue in memory of their late son, Eldon. (The Eldon is pictured at its launch in photos.)

On December 4, 1924, the theatre got new operators and was renamed the Grant Theatre. It converted to sound to stay relevant. In December of 1962, the State Fire Marshall prohibited smoking at the theatre effective on January 5, 1963. But as you can see above, the theatre was heavily damaged by fire on December 26, 1962. The final screening was a special Christmas show on December 21, 1962. A fund was taken up to repair the theatre but another fire in 1965 ended hopes of restoring the venue.