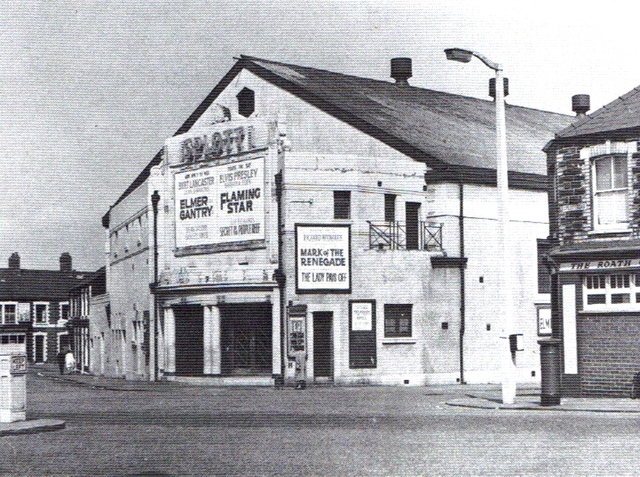 The enormous Splott Cinema advertised “over 2,000 seats”, all of which were on one floor.

It had begun on 16th May 1913 as a smaller 750 seat cinema. It was extended and modified in the 1920’s with a planned balcony which does not appear to have been completed.

The arrival of sound brought about a major re-build by local architect William S. Wort who worked on several of the Splott Circuit cinemas in the next few years. He had rebuilt the New Imperial Cinema in 1934 for Max Corne, and was then employed to plan the substantial works to convert it into an Odeon soon afterwards.

The Splott Cinema proudly boasted that it was the first cinema to be built for “talking picture” in Cardiff. Sadly, it was also one of the first to close for bingo when the game was legalised in 1960.

Unlike many early bingo halls, the Splott was very successful and continued in business, albeit under several owners/names, including a Top Rank Bingo Club, a Mecca Bingo Club. It was closed in June 2009 as a Rive Bingo Club.

The empty building was destroyed by fire on 23rd February 2015.

Last operated as a cinema by the Jackson Withers circuit, they converted the building into a bingo club and a few years later that company were taken over by the Rank Organisaion who re-named it the Top Rank Bingo Club. It is currently a Mecca Bingo Club.

A planning application has been submitted to demolish the Splott and build a large number of dwellings. (Feb 2008)

In late 2008 the Splott continues as a Bingo hall, though under new management.Externally it remains substantially unchanged when compared with pictures published in the local press in 1930 after rebuilding.

June 2009, Bingo has now ceased and the doors are boarded up.

In October 2013 the “Former Riva Bingo Hall” (sic) is to be sold by auction. The auction details suggest it as a development site .

‘In October 2013 the “Former Riva Bingo Hall” (sic) is to be sold by auction. The auction details suggest it as a development site.’

We attended one of the Auction open days and got some photos of the interior and exterior. I used to play there when it was Top Rank Bingo, loved the building, was such a shame they didn’t make more use of it and keep it in good repair. I seem to recall a news story of them uncovering large murals on the walls of the hall when refurbishing, I can’t recall when though. Anyway, the photos of the building can be seen here.