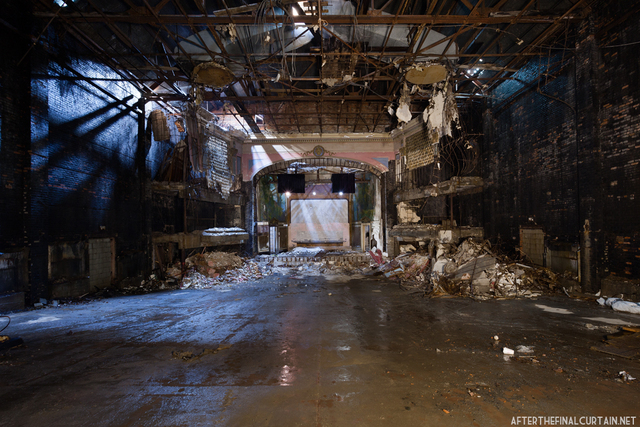 The Liberty Theatre was one of several neighborhood cinemas in Dorchester. It was built in the early-1920’s (around 1922). It was operated in the 1940’s by M & P Theatres, a Paramount affiliate.

The Liberty Theatre was demolished in early-2013.

In the Google Streetview photo above, the Liberty’s entrance is just beyond the light pole and the blue awning. The decorative filials poking up at the top of the theater facade are original.

The Street View was “updated” too far from the theater’s entrance. Left click on the photo, then click the street arrow to move one or two turns up the block, then click the right arrow in the compass rose at upper left to pivot to a more direct view of the theater front. You can also left click on the photo and hold the button down, then move your mouse to pivot the view to either side, or up or down.

It’s possible to get decent views of most theaters, but a lot of pages have been updated with inferior views, and in some cases with no view of the theater at all. Many CT users who have updated the views seem to be unaware of the finer points of Street View’s workings (not surprising, since those workings aren’t explained anywhere on the page, and not everybody is familiar with the application.)

At least in this Street View, the Liberty Theatre can be seen. Many of the Street Views are far from their theater. I used Joe Vogel’s technique above to sucessfully move the Street View for one theater at least 500- 600 feet up the street; but it was a dismal failure 7 or 8 other times. It seems to have something to do with the location of a “pivot-point” in the photo.

I’m not sure why it’s not working for you, Ron. As long as the “Update” button hasn’t already been used, and thus removed, I’ve always been able to reset the street views to the correct location. It might be a browser issue. I’ve only ever reset views using Opera, so I don’t know whether or not there are other browsers that don’t work properly with the Update feature.

Joe- the only time your technique worked for me was for the Rialto/Star in downtown Boston when I was easily able to move at least 500-600 feet up the street and around a bend, before pivoting left. All of the other times the View could not be moved far enough.The View goes to a certain point, and no further. Btw, I notice that the Street View above for the Liberty has been “unset” and brought in closer.

I’ve been able to move some street views up to a mile or so (unfortunately, these moves always leave the pin icon on the map in the old location.) But I’ve noticed that there are places where Google’s street view camera just didn’t go, and some places where there is a disconnection from one block to another. A couple of times I’ve been able to “take an alternate route” around a disconnection, getting access to a particular block from the opposite direction.

These situations are especially common in small towns, where the camera truck didn’t travel every street, and in old cities with very irregular street layouts. If the views you’ve been trying to move have been in such locations, that might be the problem. I’ve had to update several small town theaters with views from an intersection down the street, simply because Google’s camera truck didn’t cover the block the theater is on. It’s usually not a very good view, but it’s better than none at all.

I think Ken must have adjusted and reset the view for the Liberty early this morning. It was farther away last night.

If you move the street view down Charlotte Street, just past the brick apartment house, you can see the side wall of the Liberty’s auditorium with the large plants growing from the roof. If I lived in that house next door, I’d be reluctant to use my side yard for fear that a big chunk of the wall of the theater would collapse onto it. I’m surprised that the local authorities haven’t condemned the auditorium and ordered its demolition.

I was inside the former Liberty Theater at 726 Blue Hill Avenue in Boston on Tuesday, June 26, 2012, as one of several contractors and City of Boston officials attending a site visit for the purposes of preparing for the demolition of the building.

The facility is slated for demolition in the coming weeks. The actual dismantling, following the abatement of asbestos materials and other hazards, will likely begin in early August.

The interior is fairly gutted and in severe disrepair. There are areas, including the basement and stage rear areas, that are not accessible due to both collapses and water one to two feet deep.

However, there are still some architectural artifacs visible, which will likely be destroyed, unless some laborer with a historian’s bent rescues them for himself or for the local historic society (as I often do).

I have fifty plus photos. Anyone interested in receiving them, please write back, and I will send them via “SkyDrive” to the e-mail address you provide.

My limited computer skills have prevented me from successfully up-loading them here. Sorry.

Hey Philip! I live in the Boston area and that building always fascinated me. I would love to check out your pictures. Do you have an e-mail address so I can get in better touch with you? Thanks :–)

I visited the Liberty shortly before it was demolished, check out a short blog post at After the Final Curtain.

Dear Phillip, I would love to see the photos. Thanks, Lisa