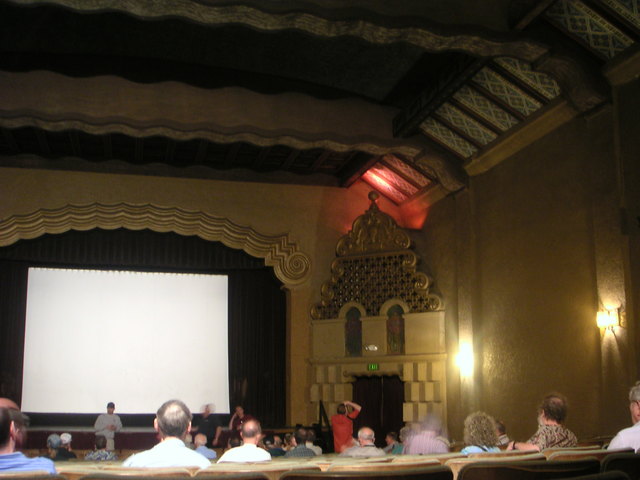 Built in 1927/1928 by Frank E. Brown as a silent movie house with 540 seats in orchestra and a small balcony levels. The architect was Edward J. Baum. It was formally opened on February 11, 1928 with a showing of the first ‘talking’ motion picture in the San Dieguito area “The Cohens and Kelleys in Paris”. The gala event was attended by Hollywood starlet and soon to be Academy Award winner Mary Pickford. It has been rumored that she rode her bicycle all the way to La Paloma Theatre from the Fairbanks Ranch for the event. Charlie Chaplin once performed here.

The La Paloma(The Dove) Theatre was one of the first to show ‘Talkies’. Talking pictures premiered in 1927 with the Warner Bros. film “The Jazz Singer” starring Al Jolson. Making the transition from silent pictures to ‘talkies’ didn’t happen overnight, so the La Paloma Theatre was also equipped with a beautiful pipe organ, a standard piece of equipment during the Silent era. Films in the early days of motion pictures were usually preceded by a vaudeville stage act, and La Palmoa Theatre was well suited for that.

The La Paloma Theatre is currently used for live performances, and over the years many performers have graced the stage of the La Paloma Theatre. Musical artists as diverse as Loreena McKennitt, Nickel Creek, Ralph Stanley, Jerry Garcia and Eddie Vedder. There are still midnight perfomances of “The Rocky Horror Picture Show” movie on Fridays. Regular screenings of independent movies are another part of the programming.

The La Paloma Theatre is a big part of Encinita, and hosts many community and City functions throughout the year.

Here is a photo, circa early 1930s. A Laurel and Hardy film is playing, but the title of the film is not given:
http://tinyurl.com/2nfjw4

I had a friend who was the “Crypt Keeper” for the theater in the 70’s and lived in the basement. His name is Mark Devries and was an artist at the Oracle Newspaper in the Haight. Where are you Mark? Miss your face. Susan

While it’s nice that La Paloma remains one of only two single-screeners still operating in San Diego, every time I go to see a movie here it’s always discouraging to see how poor the presentation is. You’ll rarely ever see a film here without multiple scratches, and there’ll usually be at least one other problem. For instance, when I saw “Where the Wild Things Are” last weekend, the center channel speaker buzzed loudly, completely distorting the dialogue, for the entire time Projector 1 was running. Thankfully, when the film changed over to Projector 2, the problem ended, but that was after 45 minutes and multiple audience complaints.

And for first-run prices ($7 matinee / $9 evening) to see second-run films with grindhouse-quality projection? Psssh. The only reason to continue patronizing the place is because we keep history alive by doing so. Then again, none of this is news. I’ve been seeing movies here for seven years and only during special screenings and first-run surf films is the presentation ever acceptable.

They seem to be doing well now compared to past times. “The Hangover” was a major hit this summer here, even warranting a midnight show on the 4th of July. And “Rocky” continues to draw every week. So why can’t they invest some more time and money in the booth?

As part of a film studies class taken at El Camino High School in August 1990, I went on a field trip to La Paloma to see a movie (Disney’s “The Jungle Book”) and tour the theater. Some things I remember from the tour: viewing the dressing room that lies behind/beneath the stage, and walking up to the projection booth. The tour guide told our group that when the theater first opened a drunk man fell from the balcony and died, and that his ghost supposedly still haunts the place. Has anyone heard this story before? It may have been fabricated for the amusement of our little group of high school students.

Yep, that is indeed the story.

I’ve enjoyed reading everyone’s comments. Would you like to gather more community support for this historic theater … perhaps keeping it from, one day, being the next one-screen theater to be torn down? To the Website owners: You may want to add button(s) to “click,” which would allow for the description of the theater and the comments, one at a time, to be shared on social media … or perhaps one “click” could simply share the whole page about the La Paloma Theater, description, comments and all. It’s common practice now, of course, for comments from various Websites to be shared on social media; Twitter and Facebook come to mind most readily. Best wishes to you, La Paloma!

In the late 1970s, when I was 16-years-old, I went to see the live performance of Elvin Bishop in concert at the La Paloma. “Fooled Around and Fell in Love” was his hit song that had been getting a lot of radio play. We, in fact, were invited to the party upstairs. A fair number of people were at the party, maybe 25 people, and most were standing and mingling. We watched the concert from a room that had a whole wall missing on one side, you might say. I think this was also the projection room. Sitting in that space, the view was of the stage (and from that vantage point, we also looked out, over the audience). When facing the stage, from this upstairs space, to the right was what I was told was an apartment. Partygoers were welcome in this very small apartment as well. It was definitely residential—not a public space at all. I have vague, visual-memory recall that there was only one small bedroom, but since it was so long ago (about 42 years!), I’m not sure if it truly was just a one-bedroom apartment—but that’s how I’m remembering it. There was a short wait (a line of 3 or 4 women) to use the one toilet, private bathroom. We also were able to walk out onto the roof, like it was an outdoor patio. I could tell the building was very old. It was in good condition, with nothing seeming to be particularly run-down. The La Paloma held extraordinary vintage charm! I enjoyed the music and I’d say a fun time was had by all that night. Actually, it’s one of my most favorite memories!