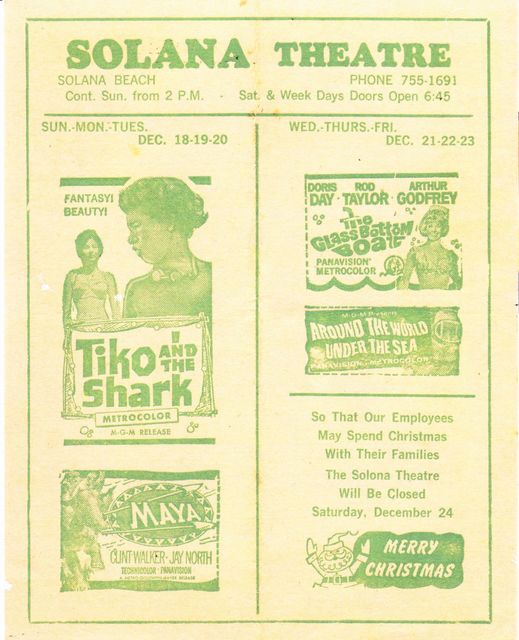 The Solana Theatre was opened around 1937 and was still open into the 1970’s.

“Joe Markowitz, Solana Theatre at Solana Beach, was on Filmrow booking and buying” said an item in the Los Angeles news column of the January 25, 1965, issue of Boxoffice.

Don’t imagine this entry gets too much traffic, but curious to know if anyone recalls an old deco theatre (maybe from the ‘20s or '30s) either on 101 or S. Cedros just south of Lomas Santa Fe? It had a period vertical neon sign, I believe it was called the Solana. I went there twice as a kid in the summers of 1974 and '75, seeing Butch Cassidy & the Sundance Kid and The Towering Inferno, respectively. Butch was a re-issue that summer and Inferno was a straggler in a prolonged second-run showing at this theatre, 2nd-runs being probably all it was showing by this point in its history. Big auditorium, maybe 900-1000 seats, but looking somewhat derelict inside. Hardly anyone in the house at either screening (matinees, I think) except my brother and I. Don’t know when it would have closed, but a return visit to Solana Beach in 1992 saw that it had been taken over by a used furniture store. The vertical sign was stil extant, but maybe the lettering was missing. Looking at Google maps now, it must have been demolished; there’s no trace of it either on 101 or South Cedros.

A spring, 1962, program for the International Film Series presented by the University of California Extension lists movies at the Ken Art Cinema on Thursday evenings and at the Solana Theatre on Tuesday Evenings. It gives the address of the Solana Theatre as 113 Acacia Avenue.

A couple of web sites say that the Solana Theatre was built by the Smith Construction Company, founded by Milton and Dorothea Smith in 1937, which would date the theater to that year or later.