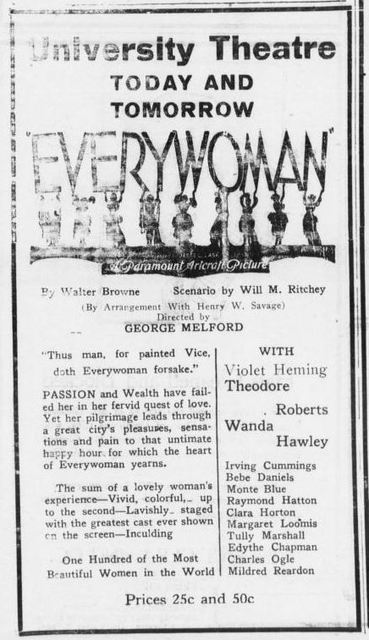 Located near the intersection of E. Main Street and N. Crawford Avenue. The University Theatre was opened by Giffith Amusement Company in December 1930. It was a replacement for an earlier silent-era University Theatre.

The University Theatre was designed in pure Art Deco styling, as seen in these 1936 exterior and auditorium views. On below site type in word “theatre”, then hit search…
View link

As seen on google maps street view, the University Theatre still stands on the North side of E. Main St, just West of Crawford St. Purpose built as a movie house, there never was a stagehouse. Since (at least) 1969 the building has been used for retail space, but other than that the exterior still looks pretty much the same, a handsome brown brick facade with tan Art Deco accents.

Here are some new photos of the University:

This is what the former University Theatre looks like these days (Art Deco bldg with striped awning, between Norman Convention & Marquis),
View link