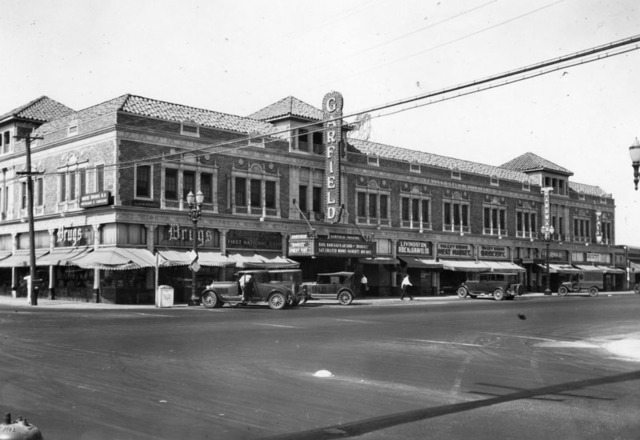 Bard’s Garfield Egyptian Theater was opened November 12, 1924 as part of the Valley Grand Building which contained apartments and retail. Designed in an Egyptian syle by noted theater architect Lewis Arthur Smith for the L. Lou Bard chain Far West Theatres Inc. It initially presented vaudeville and movies. All seating was on a single floor. It was equipped with a Wurlitzer theatre organ. It damaged by a fire in 1928 and repairs were carried out.

Later taken over by the Edwards circuit, the Garfield Theater was closed in the 1980’s, when it had been leased out and was showing Chinese movies. The auditorium has been demolished, but the Valley Grand Building survives, albeit without some of its decorative details on the upper part of the building which were removed years ago due to earthquake damage limitation.

My best cinematic experiences were had in this theatre in the early 90’s with my pal, Jeff, watching fantastic HK double bills and choking on BBQ shrimp crackers washed down with a Janlibo.

back in the late 70’s my parents brought me here and we saw “Alien” and I vividly recall seeing Battlestar Galactica here. After seeing Alien we ate dinner at Pepe’s down the street (which is still in business today). Alhambra has changed quite a bit since those days.

I remember this theater well and loved watching movies here. I distinctly remember watching several of the original THE PLANET OF THE APES movies here and Irwin Allen disaster films like THE POSEIDON ADVENTURE and TOWERING INFERNO. If you grew up in Monterey Park/Alhambra in the 70’s, this is where you went to the movies. And, of course, the Monterey Theatre further south on Garfield. Also, the original THE HAT location was just across the street. Still is. And if you like pastrami, it’s the place to go.

Something I never knew about the Garfield Theatre is this bit of news from the January 13, 1929, issue of The Film Daily:

“Alhambra, Cal. — The Garfield, recently destroyed by fire, has been opened with renovations. The house shows sound picture via Vitaphone.”I think that the Garfield must have lost some of its original Egyptian decor in this fire, as there was little of it left by the 1950s even though the house then looked like it hadn’t been updated in decades.

I worked at the Garfield Theater from 1978 until 1982, when the Vinnikoffs sold the theater to a group that turned it into an Asian Movie Theater. I knew the manager that Dublinboyo mentions in his post and I had to drag him out of that same bar many a night (Mr. Bang?).

That theater was a real trip. It still had the original dressing rooms located under the main stage, which had thousands of signatures and dates written on the doors and walls. Some from the early 30’s and 40’s. We found several hidden rooms that you couldn’t access without some creativity (we had rock climbing gear!). Looked like rooms for an organist and other uses about half way up between the main floor and the ceiling. Climbing across the catwalks above the ceiling was very trippy as well. We all swore the place was haunted, based on the random noises and lights we would see flashing through there when no one was around.

I drove by that area late last year and was horrified to see that they turned that corner into a bunch of shops. There’s no sign of the Garfield Theater except for the vintage looking facade. If you didn’t know it was there, you’d miss it. Heck, even Pizza Pub, which was caddy corner to the theater has been torn down and rebuilt as something else. The only thing remaining is The Hat!

Hi everyone. I write for a local, USC-owned community website and I’m interested in doing a story on the old Garfield Theater. I’m particularly interested in the era when it served as a Chinese theater, but would love to know anything and everything about the place. If you would like to help me out a bit—and anything, from anecdotes to photos, will help—please drop me a message at . We can communicate via email or phone from there. Thanks!

PS- I grew up just a couple blocks away and was always intrigued by the old building (sadly, I only got to go in once before it was permanently closed).

My family owned this property from the late 80’s up until 2010. It was renovated into pacific square shopping plaza. I worked in the theater as a child, serving refreshments and sweeping up after shows. We often showed chinese movies for free, mainly for the seniors to have something to do and for a way for kids to be more in touch with their Asian roots. My grandfathers medicine shop was next to the theater for many years. We renovated it because no one was watching movies anymore, and we couldn’t justify devoting all the square footage to a theater that nobody went to. We were able to preserve the facade in effort to keep a piece of history in the city, which was no easy task. It would have been easier to demolish, but my dad was very much in love with the design and felt it should be preserved as a piece of history. We’ve since sold the building, but I have many original antiques that were removed from the theater if anyone is interested in seeing or hearing more about it.

Message for Garfield Theater. I am the owner of the blogger site “BIJOU MEMORIES ” I am currently researching the theatres I visited in the 70’s and 90’s in the San Gabriel Valley. I had visited the Garfield Theater many times, seeing such films as “Once Upon a Time in China and America”, The Storm Riders (almost 6 times on consecutive weekends, dragging as many friends and family as I could coerce), and “Hitman” and so many others.

For the blog I am currently writing, I would like to ask if you have any photos of the interior or the theatre, as well as any flyers or advertising material that you would care to share. This would help me in presenting a full and meaningful remembrance of this marvelous venue. If anyone else has any additional artwork, flyers or photos.. please feel free to contact me at