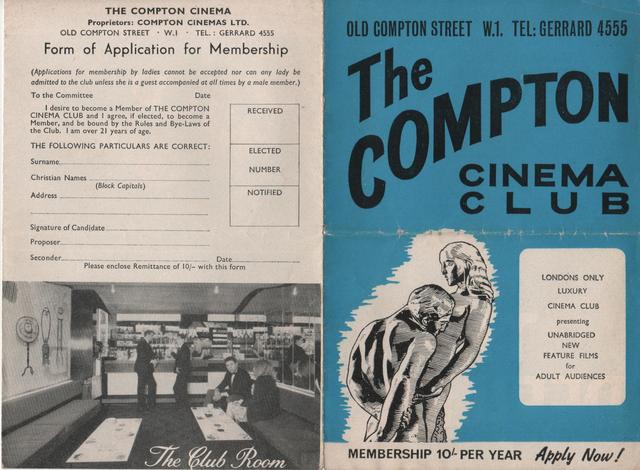 The Compton Cinema Club opened in November 1960 with the ‘banned’ American production "Private Property". It was operated by Compton-Cameo Film Distributers who specialised mainly in ‘continental’ adult films. Located in the heart of Soho (at that time London’s red-light district) it operated as a cinema club where by law, customers were obliged to pay a fee and join as a member at least one hour before they could be admitted. By becoming a cinema club the cinema could navigate around the censorship laws which regular cinemas had to comply.

The cinema was located in the basement of the building and had a licenced bar for members to relax in and take cocktails. Seating in the auditorium was covered in a black velvet material and the walls were covered with a plain pleated curtain material.

The projection box was located behind & under the 12feet wide screen and consisted of two projectors which faced each other, the image being directed onto the screen via a series of mirrors.

Over the years many films, particulary from Europe had their premier runs at the Compton Cinema Club because of the nature of their uncensored content. In July 1977 the premier run of the banned Pasolini film "Salo-120 Days of Sodom" broke the usual run of uncensored sex movies. Despite full houses, the film was withrawn after two weeks as the owners were threatened with prosecution for screening obscene material.

By early-1984 it had closed and was purchased by Paul Raymond Organisation who operated many of the sex businesses in the area, and the cinema was offered ‘To Let’. The marquee and signs were later removed from the building and it never re-opened for entertainment use.

In the mid-1990’s the red-light area of Soho began to be replaced by the gay village seen today and the building was converted into offices for Rainbow Cars, a gay taxi company. Today, the auditorium is in use as the kitchen for the adjacent Balans gay restaurant.

An interesting vintage postcard view of the Compton Cinema:
http://www.flickr.com/photos/kencta/496197385/

A vintage photograph taken in May 1985 after closing as The Londoner Cinema:
View link