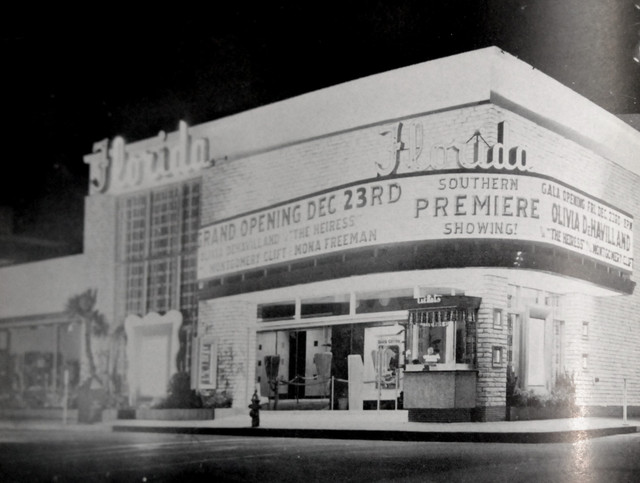 The Florida Theatre opened on December 17, 1949 with Olivia De Havilland in “The Heiress”. It was operated by Florida State Theatres, and had a seating capacity for 871, all on a single floor. The Florida Theatre was closed as a movie theatre in 1981.

Later known as the Cuillo Centre for the Arts, it features both live performance and film presentation. The balcony was recently enclosed and transformed into a separate auditorium. In 2011, it was renamed the Don & Ann Brown Theatre.

Here and here are photos from June 2007 of the former Florida Theatre.

Would love to see exterior and interior photos of when it was the Florida Theatre.

The theater did not originally have a balcony – I worked there in 1986-89, when it was the home of the Florida Repertory Company. It was gutted around 1996 when the Burt Reynolds Institute for Theatre Training took it over.

I lived in WPB for over 30 years and never entered this theatre which was located downtown near the library though I did go to the Paramount in nearby Palm Beach. Now that I’m a theatre buff I wish the theatre’s originality had not been compromised and it was as it opened in 1949. Strange to learn that this theatre never had a balcony.

Time for another name change: It’s now The Don & Ann Brown Theatre, new home of Palm Beach Dramaworks, with another round of extensive renovations. Substantial coverage at http://www.palmbeachdramaworks.org/clematisnews.php

Quite the video for palmbeachdramaworks! Congratulations on their upcoming opening 11.11.11

Wish the interior had been kept original as it would be quite an original landmark now in 2011.

this was the Florida theater when we were growing up.

Do they have a website? Just saw this theater on a recent family visit and thought it was a brand new one, not a classic one that was renovated.

Sorry to read that “the balcony was recently enclosed and transformed into a separate auditorium.”